'It's all about border safety' for DHS, Napolitano says

(CNN) -- Homeland Security Secretary Janet Napolitano unveiled a $700 million plan on Tuesday to help Mexico fight violent drug cartels, which includes a U.S. crackdown on the flow of weapons and money into Mexico. 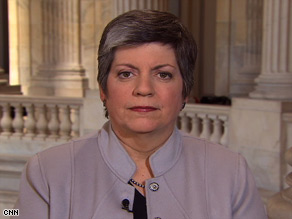 The move sets the stage for visits to Mexico by three administration Cabinet members, starting tomorrow with Secretary of State Hillary Clinton, in an effort to stem drug-related violence and prevent it from spilling into the United States.

Kyra Phillips: Well, I want to get right to it because we'll never be able to defeat the drug lords until our own demand for drugs here in the U.S. is curbed. I mean, it is our consumption in the U.S. that fuels the drug lord production. So, what are you going to do to decrease that demand?

Janet Napolitano: Well, the whole package we announced today is not only about enforcement and stopping the flow of drugs into the United States and helping Mexico against these very brutal cartels, but it includes money for more drug courts and reduction in demand. So, we look forward to working on the demand side as well as the supply side, but I'll tell you, where the Department of Homeland Security is concerned, it's all about border safety and security and making sure that spillover violence does not erupt in our own country.

Phillips: We're talking about more than 200 cities, cities that we'd never think of, like Sheboygan, Wisconsin, and Sioux Falls [South Dakota]. I mean, what about the people right now that are dealing with sexual abuse, murder, house invasions, kidnapping?

Napolitano: That's right. What is happening, for those who don't live on the border, is that there are some large drug cartels. They're old. They've been in Mexico for a long time, but they've gotten larger and more powerful. The president of Mexico has said, enough. And he is really going after those cartels.

We've been clamping down on the land border, so the cartels simultaneously are fighting each other over ever-diminishing turf and they're fighting the federal government of Mexico. And that's what's caused 6,000 homicides in Mexico -- northern Mexico last year -- 550 of which were law enforcement or public officials who were assassinated by the cartels.

But the cartels got so big and powerful because they were bringing tonnage loads of cocaine and other illegal drugs into our country, and their organizations ultimately went to supply those who are using illegal drugs in places like Sheboygan and places -- other places where you wouldn't think of having any connection with these big cartels. Their fingers were everywhere. We want to shut those cartels down.

Phillips: Well, there are a lot of leaders here in the United States that say it's been -- we've helped those cartels. We've actually helped fuel the problem. And if you look at [Sen.] Dick Durbin [D-Illinois], chairman of the Senate Judiciary Subcommittee on Crime and Drugs, he said the drugs are coming north, and we're sending money and guns south. And as a result, these cartels have gained extraordinary power. And he also added, about 90 percent of guns seized in Mexican raids are traced back to the United States, About 2,000 firearms cross the border into Mexico daily.

Napolitano: Well, it's a significant number of the guns used in this wave of violence in northern Mexico absolutely come from the United States. That's why part of our plan is increasing the number of agents who are going to inspect southbound vehicles. That's why we're sending technology to the border that will allow us to scan or do noninvasive X-rays to see whether cars are carrying assault weapons, other kinds of weapons that are now flowing into Mexico to fuel these drug cartels. And to find these huge truckloads, basically, of cash that are garnered in the United States and sent to Mexico. This is a strategy that we are -- have used in certain places. Now we're employing it border wide.

Phillips: So, Madam Secretary, let me ask you about the military. For example, we've covered the city of Juarez, Mexico. You know how bad of a place that has been. Brutal murders, sexual abuse against women, people being beheaded, kidnapped. I mean, just ruthless cartel activity. And what did Mexico do? They took 5,000 military troops, 1,200 federal police officers and just about bombarded Juarez.

And so, now they've seen a drop in these drug-related killings. It's sort of like what we saw in Iraq, you know, putting in troop surges into certain areas, and you saw a drop in violence. Would you ever consider doing something like that, getting the military involved and saying, OK, we can't take this anymore, we've got to do something drastic or it won't work?

Napolitano: Well, obviously, the violence problem in Juarez was of a different quality and kind than anything we've seen in the United States. And it really did demand that kind of response by the federal government in Mexico.

We have contingency plans on the United States side. And we're still evaluating a request that we do send some National Guard to some of the border areas. We're still looking at that. But you know, that clampdown in Mexico, in Juarez in particular, was really called for. The homicide situation there was out of control.

Phillips: Let's talk about Gil Kerlikowske, the former Seattle [Washington] police chief. [President] Obama has selected him to be the drug czar for all of you. He hasn't been confirmed yet. But what does he know about dealing with cartels who have mastered kidnapping and beheadings and are using grenades and other forms of firepower, quite frankly, that is far greater than a lot of police forces we have in the U.S.?

Napolitano: Well, he's a police chief, and police chiefs know a lot about a lot of different things. And as you yourself pointed out, these drug cartels have fingers that reach all over the United States, including into communities like Seattle. So, he'll come into that job, assuming he's confirmed, with a knowledge base, and also a knowledge base about what the use of illegal drugs is doing to people, does to families, does to our neighborhoods, our communities. That's why we need to work on the demand side as well as the supply side through these cartels.

Napolitano: Thank you so much.