Obama defends his budget as essential to recovery

(CNN) -- President Obama presented a sober assessment of the state of the economy in his prime time news conference Tuesday, but he insisted his administration has a strategy in place to "attack this crisis on all fronts." 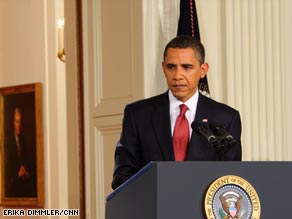 President Obama reiterated his pledge to halve the deficit within five years.

"It took many years and many failures to lead us here. And it will take many months and many different solutions to lead us out. There are no quick fixes, and there are no silver bullets," he said.

"We'll recover from this recession, but it will take time, it will take patience, and it will take an understanding that, when we all work together, when each of us looks beyond our own short-term interest to the wider set of obligations we have towards each other, that's when we succeed," he said.

The president defended his budget, which has come under criticism for its hefty price, saying the plan he proposed is "inseparable" from the overall strategy for economic recovery.

"We've got to make some tough budgetary choices," the president said in his second prime time news conference. "What we can't do, though, is sacrifice long-term growth, investments that are critical to the future, and that's why my budget focuses on health care, energy, education, the kinds of things that can build a foundation for long-term economic growth, as opposed to the fleeting prosperity that we've seen over the last several years."

The president brushed off skeptics of the scope of his investments, saying, "We haven't seen an alternative budget out of them." He also reiterated his pledge to cut the deficit in half over the next five years.

Asked whether he would sign a budget that doesn't include a middle-class tax cut, Obama said he has "emphasized repeatedly" what his expectations are.

"I haven't seen yet what provisions are in there," Obama said. "The bottom line is that I want to see health care, energy, education and serious efforts to reduce our budget deficit. And there are going to be details that still need to be worked out."

Obama's appearance came on the heels of the unveiling of the Treasury Department's new bank rescue plan.

The goal is to buy at least $500 billion of existing assets and loans, such as subprime mortgages that are now in danger of default. After the announcement of the plan, the stock market rallied, posting the biggest gains in months.

"Keep in mind that it is precisely because of the lack of this authority that the AIG situation has gotten worse," Obama said, referring to the troubled insurance giant.

It was revealed last week that AIG doled out massive bonuses to executives after receiving more than $170 billion in bailout funds.

Pressed about why he waited three days to publicly speak out against AIG paying the bonuses, Obama told reporters, "It took us a couple of days because I like to know what I'm talking about before I speak."

While most of the news conference focused on the economy, Obama faced a handful of questions on other topics.

Obama defended his executive order repealing a Bush-era policy that limited federal tax dollars for embryonic stem cell research, saying that signing the order earlier this month "was the right thing to do and ethical thing to do."

"I am glad to see progress has been made in adult stem cells, and if the science determines that we can completely avoid a set of ethical questions or political dispute -- then that's great. I have no investment in causing controversy," Obama said, adding, "What I don't want to do is predetermine this based on a very rigid ideological approach, and that's what I think is reflected in the executive order that I signed."

Asked about the violence in Mexico and the risk of spillover to the United States, Obama vowed to invest the resources needed to address the situation.

"If the steps we have taken do not get the job done, then we will do more," he said. Earlier Tuesday, Obama's administration announced plans to send hundreds more federal agents and new crime-fighting equipment to the border as the United States struggles to roll back a tide of drug-related violence.

Asked if race has affected the way he has been perceived in any policy debates since taking office, Obama said, "The last 64 days has been dominated by me trying to figure out how we're going to fix the economy, and that affects black, brown and white." iReport: Your reaction to the news conference

"Obviously, at the inauguration, I think that there was justifiable pride on the part of the country that we had taken a step to move us beyond some of the searing legacies of racial discrimination in this country, but that lasted about a day."

Right now, he said, the American people are judging him as they should: "Are we taking the steps to improve liquidity in the financial markets, create jobs, get businesses to reopen, keep America safe? And that's what I've been spending my time thinking about."

In his more than 50-minute appearance, Obama mentioned Afghanistan and Iraq only in response to a question about trimming the Defense and Veterans Administration's budget.

There were no questions specifically about the Iraq War, which entered its sixth year last week. Osama bin Laden and terrorism also were not mentioned.

During the news conference, Obama called on three news outlets not typically called on at a prime time event: Univision, Ebony Magazine and Stars and Stripes.

Obama's news conference comes after he made the rounds on television this past week, with an appearance on "The Tonight Show with Jay Leno," and an interview on CBS's "60 Minutes."

In his first prime time news conference, the president used the national platform to make the case for his economic stimulus plan, which has since been passed by Congress and signed into law.