(CNN) -- The Catholic bishop of South Bend, Indiana, will not attend graduation ceremonies at the University of Notre Dame because he disagrees with the stem-cell research and abortion views of the commencement speaker -- President Obama. 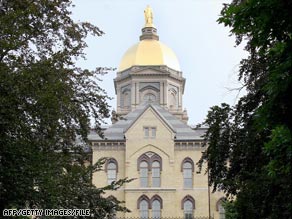 The University of Notre Dame says its invitation doesn't mean the university agrees with all of Obama's positions.

Bishop John D'Arcy, whose diocese includes Fort Wayne, Indiana, as well as the university town, said Tuesday in a written statement that "after much prayer" he has decided not to attend the ceremony.

"President Obama has recently reaffirmed, and has now placed in public policy, his long-stated unwillingness to hold human life as sacred," D'Arcy said. "While claiming to separate politics from science, he has in fact separated science from ethics and has brought the American government, for the first time in history, into supporting direct destruction of innocent human life."

Earlier this month, Obama reversed a federal ban on embryonic stem-cell research. Many scientists say the research could lead to advances in treating conditions like Alzheimer's disease and Parkinson's disease, while some abortion opponents believe destroying embryos in the research amounts to ending a human life.

In January, Obama lifted a Bush administration restriction on funding for organizations that provide or promote abortion overseas.

D'Arcy's announcement comes as anti-abortion groups have launched campaigns attempting to persuade the Catholic university to rescind Obama's invitation. In a letter to Notre Dame, Anthony J. Lauinger, National Right to Life Committee vice president, called Obama "the abortion president" and said his invitation "is a betrayal of the university's mission and an affront to all who believe in the sanctity and dignity of human life."

The conservative Cardinal Newman Society has launched a Web site -- notredamescandal.com -- that, according to the site, has drawn 50,000 signatures to a petition opposing Obama's appearance at the May 17 ceremony, at which Obama also is to receive an honorary degree.

A White House statement released Tuesday said Obama is honored to be speaking at the university and welcomes the exchange of ideas on the hot-button topics.

"While he is honored to have the support of millions of people of all faiths, including Catholics with their rich tradition of recognizing the dignity of people, he does not govern with the expectation that everyone sees eye to eye with him on every position," the White House said. "[T]he spirit of debate and healthy disagreement on important issues is part of what he loves about this country."

Obama will become the ninth sitting president to give the commencement speech at Notre Dame. Most recently, presidents Jimmy Carter, Ronald Reagan, George H.W. Bush and George W. Bush have spoken there.

In a written statement on Tuesday, Notre Dame President John I. Jenkins noted that the university has been host to Democratic and Republican presidents and said the invitation does not mean the university agrees with all of Obama's positions.

"We will honor Mr. Obama as an inspiring leader who faces many challenges -- the economy, two wars, and health care, immigration and education reform -- and is addressing them with intelligence, courage and honesty," he said. "It is of special significance that we will hear from our first African-American president, a person who has spoken eloquently and movingly about race in this nation.

"Racial prejudice has been a deep wound in America, and Mr. Obama has been a healer."

On abortion and stem-cell research, Jenkins said he views the invitation as "a basis for further positive engagement."