Meghan McCain: 'I support the president'

(CNN) -- Meghan McCain, a contributor to TheDailyBeast.com, is the daughter of Sen. John McCain and Cindy McCain. But it's her recent verbal sparring with conservative Republicans that's put her in the spotlight. 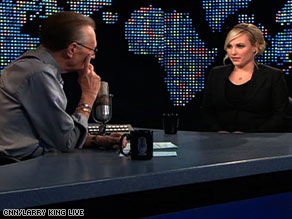 Meghan McCain tells Larry King on Monday night: "I'm not going to be bullied around about my weight."

In a wide-ranging interview on Monday on CNN's "Larry King Live," McCain discussed her thoughts on President Obama, her recent heated exchange with radio host Laura Ingraham, her tattoos and more.

Larry King: [President Obama] is taking some criticism for smiling and laughing [during his "60 Minutes" interview.] Are you one of those critics?

Meghan McCain: You know, I actually am not. I think anyone that would possibly think that the president is not taking the economy seriously -- I just think it's ridiculous. ...

King: [Is President Obama getting overexposed]?

McCain: I think he is on the verge of it. I do think you have to be careful. But it is a different generation. [My] generation ... we like our celebrities. And I think that he realizes that because he is very much a Generation Y president. However, he is on the risk of alienating his older followers.

King: Does Obama seem like the same guy who ran against your dad? How do you view him?

McCain: He's our president and when the election was over and when President Obama won, all negative feelings were gone. I support the president.

King: How does your dad feel about that?

McCain: I think the same way. You know, my family is really good at letting go of things and moving on. And he just holds no grudges.

King: Do you think most of the people in your party agree with [Rush] Limbaugh? Do they want him to fail?

McCain: I don't know, because there are many different personalities within the party. ... I would never want my president to fail, no matter which party is in power.

McCain: I interviewed [Supyira] Jindal, the first lady of Louisiana. And she's a fascinating woman. She totally impressed me because she was very warm and friendly.

I went down and interviewed her and the piece came out today on TheDailyBeast.com.

King: Do you consider yourself a moderate? Are you moderate liberal?

McCain: I consider myself a progressive Republican. I am liberal on social issues. And I think that the party is at a place where social issues shouldn't be the issues that define the party. And I have taken heat, but in fairness to me, I am a different generation than the people that are giving me heat. I'm 24 years old. I'm not in my 40s, I'm not in my 50s and older.

King: Therefore, you must, based on what you said, disagree with your father? ... Do you discuss it?

I believe in gay marriage. ... I personally am pro-life, but I'm not going to judge someone that's pro-choice. It is not my place to judge other people and what they do with their body.

King: We have an e-mail question from Veronica, Huntington Park, California: "Do you share most of your father's political views?"

McCain: When it comes to war and the economy, and many fiscal conservative values, I agree with him. I mean I fell in love with the Republican Party because of my father.

King: Earlier this month, [you] wrote a DailyBeast column criticizing right-wing pundit Ann Coulter. Conservative radio host Laura Ingraham fired back at you, including making a comment about your weight. You then gave a straight talk response in an appearance on "The View." What led to that?

McCain: You know, it's so funny. I was in the airport today and this guy goes, "Hey, Meghan, kiss my fat ass." And I was like oh my gosh. That's where this has gone to.

As far as I'm concerned with what's going on with Laura Ingraham, on my end, it's over. There are nine million women in this country suffering from eating disorders. And I'm not going to be bullied around about my weight and what kind of standards I'm not fitting. ...

King: Were you surprised that Laura, who's had breast cancer, got into something that personal?

McCain: I had never heard of her before until this happened.

King: You didn't know her?

McCain: No. I'm not familiar with her work. But I hope she doesn't do it again.

King: What about Ann Coulter?

McCain: She didn't respond, which is fine with me. ... All I wanted to do is show women that you don't have to be Ann Coulter and Laura Ingraham to have a place in the Republican Party. ... Supriya Jindal is a good role model, but a lot of people hadn't heard of her.

And I just want to show that you don't have to think one way and fit into this one box in order to be a member of the Republican Party.

King: Were [your parents] angry at Laura Ingraham?

McCain: My mother was. She's a very protective mama bear.

King: Are you a tattooer?

McCain: I have one. My brothers have a lot of tattoos. I love tattoos. I do. I know, you never would have thought me, right? But I do.

King: No. You don't look like a tattooer. What do your folks think of that?

McCain: I've got supportive parents, you know. My mom thinks it's cute. ... I have a little star on my foot.

King: What kind of dad is your father?

McCain: He's great. I love my dad so much. He's the best father to me. And like I said, he's so supportive of me and my career and what I do and speaking my mind.

When you grow up having a maverick as a father and an example, you can understand how I turned out like this.