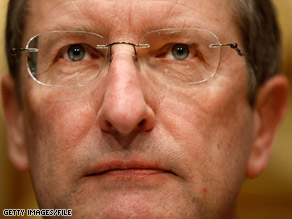 Sen. Kent Conrad of North Dakota said the Senate Budget Committee, which he chairs, will vote on his version Wednesday.

"We've made hundreds of billions of dollars of changes to make this work to get down to the deficit goal and at the same time maintain the president's priorities -- education and energy and health care," Conrad said as he left a closed meeting in the Capitol, where he briefed Senate Democratic colleagues on his plan.

Conrad and other centrist Democratic senators -- whose support is critical to passing the legislation -- have raised concerns about the long-term impact of the president's spending plan on the deficit.

On Friday, the Congressional Budget Office estimated Obama's plan would cost more than $9 trillion over the next 10 years.

The president will travel to Capitol Hill Wednesday to lobby Democrats in the House and Senate ahead of votes in each chamber this week. A top administration official, speaking not for attribution, said the White House might go along with Conrad's proposal because it maintains the key elements of Obama's plan.

Republicans who blasted the Obama budget proposal for spending, taxing and borrowing too much also criticized Conrad's proposal because some of the items Conrad stripped from the spending blueprint might have to be funded anyway.

For example, Conrad's budget strikes Obama's proposal to set aside $250 billion in case more money is needed for the financial sector rescue, an aide said.

"It's certainly not a gimmick," Conrad responded. "We faced up to changes."

Republicans were also critical of Conrad's plan to calculate the budget deficit over five years instead of 10, meaning a common measure of government spending, the 10-year cost, wouldn't officially be part of the price. Gregg accused Conrad of trying to hide the true cost of the plan.

One hot-button item that will not be part of the Senate proposal is a controversial procedure called "budget reconciliation," Conrad said. Through reconciliation, Democrats would be able to pass major overhauls of health care, global warming and other key policies without the threat of a Republican-led filibuster.

While several Republicans said they were pleased Democrats would not use reconciliation, they remained skeptical, because the White House and House Democrats have expressed interest in using the procedure.