WASHINGTON (CNN) -- Slouching alone at the head table before a room of business reporters today, Treasury Secretary Tim Geithner looked like an overgrown prep school student facing the expulsion board. It wasn't what he said, but his demeanor as he said it. 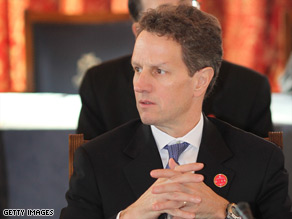 Treasury Secretary Tim Geithner has faced stiff criticism over his handling of the financial crisis.

Cautious, gazing out from deep-set eyes -- he seemed to shrink from the room. And the room was skeptical.

Geithner unveiled the new "Public-Private Investment Program," in which taxpayer funds will be used to seed partnerships with private investors that will buy up toxic assets backed by mortgages and other loans.

When the secretary calmly said that taxpayers would get a fair shake in the deal because the funds in question "are managed by professionals who know how to do this for a living," one reporter could be heard sighing, "oh, great."

The wariness was mutual. Asked whether he thought this economic plan would play well outside Washington, Geithner offered a wry smile. "I'm confident that you and your colleagues will do a good job of framing this thing," he replied.

Geithner's presentation lasted just over 35 minutes, the bulk of that time answering reporters' questions -- though no cameras or microphones were allowed. Most questions were along the lines of, "why do you think this will work?"

He sat at a wooden desk with an unopened bottle of Dasani water and an untouched glass, an American flag behind him, and a thin microphone in front.

For anyone who has considered getting Botox, Geithner would be an object of intense jealousy: his forehead almost never moves. His look was solitary and small.

Slumped in a chair, lost in a suit with pants that seemed to swallow him, he used his large hands: sweeping out wide as he explained his confidence in the plan, then folding into a steeple as he was asked for more specifics.

To a first-time observer, there are similarities between Geithner and President Obama. Like the president, he is exceedingly lean and lanky; the look, disciplined. Like the President, his calm and caution gave him an air of seeming detachment from his subject and the people questioning him. He doesn't react, he reflects. He takes time with his explanations; his attitude toward his audience: patience.

But lacking the President's ease and amused charm, the steadiness doesn't seem Zen. It gives him the air of an exceedingly professional scientist: if this experiment doesn't work out, it will provide fascinating insight for the next experiment. Too bad for the lab rats?

Folks who know Geithner say that's a wildly a unfair assessment: that he's a deeply empathetic man who cares about the little guy. It's not his fault that his demeanor doesn't reflect that.

The business reporters in the room grilled him endlessly about loan rates and investment enticements and how this plan would be structured. It wasn't until the very end that he was questioned about how this will play "outside Washington" and whether this is skewed against the taxpayers.

To both he betrayed no emotion. "It's very important we make sure taxpayer money is not used to reward people who should not be rewarded," he said, sounding for the first time like a talking points politician.

At one point, earlier in the briefing, he did acknowledge there is "deep anger and outrage" in the nation. But, he explained, "we need to balance that against the objective" -- which is to get investors to buy the things that are killing banks' balance sheets--and freezing up business loans and the economy. "I'm confident we can get that balance right," he smiled.

The most revealing insight came when Geithner explained, "The challenge is that after a period of too much risk, right now there isn't enough risk taking," he explained, "We now need to encourage investors to take risks."

In other words, we want to unleash a little of the gambling instinct that got us here in the first place. Put another way -- Wall Street is holding the rest of the economy hostage. It's all because of these toxic assets. He wants hedge funds and private equity firms to buy those assets and free the economy. Not the same crazy risk-takers who tanked our economy by gambling too big and losing.

Geithner has faith in the last standing Wall Street institutions. He says the problem is they're feeling skittish; the hedge funds etc. were burned by their bad bets, and now they're terrified of parting with their money. Since they won't buy the toxic assets without big protections he wants to give it to them.

His idea: Let the government coax them into investing in these toxic assets by minimizing the chance that they'll lose big and maximizing the chance they'll profit if all goes right. They're trying to get Wall Street's gamblers only a little bit drunk so they'll dive into the market again.

But what if it all runs amok? Will they get ridiculously rich off the taxpayers or will the taxpayers lose big. Uh, time will tell?

And it was over. He thanked the room. And then a press secretary stepped forward, a man who I'm told came with Geithner from the New York Federal Reserve. He looked out at the room of reporters with their wireless-enabled laptops and BlackBerries and announced, "We're going to impose an embargo," he said. That's press lingo for "You're not allowed to share this info publicly till we say so." Only, he announced the embargo more than an hour too late.

Reporters had been sending their newsrooms snippets of his comments and details of the plan from the moment they arrived at the briefing. The information was already out. Can they really be this unclear about how the Washington press works? Not a good sign.

On the way out of Treasury -- where the ceilings appear to be painted gold -- a huddle of reporters stood in front of a "staff" board featuring pictures of officers at the department: seven in all, including several holdovers from the Bush administration.