(CNN) -- Christina Romer, President Obama's chief economic adviser, says getting toxic assets off the books of the nation's banks is key to getting the credit markets working again. 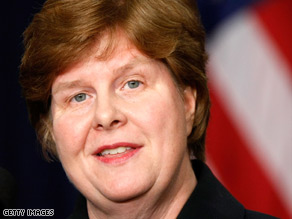 Christina Romer says the reason for partnering with investors is to avoid paying too much for toxic assets.

The U.S. Treasury on Monday announced that the federal government is partnering with private investors to buy up these assets.

CNN's John Roberts spoke with Romer on Monday's "American Morning." Following is a transcript of their conversation.

John Roberts: How is this going to work, this toxic-asset buyout?

Christina Romer: The way it's going to work is that the U.S. Treasury is going to partner with private investors and with both the Federal Reserve and the FDIC to go out and buy these so-called toxic assets off the banks' balance sheets. These are the assets that are pretty uncertain. We're not sure where the prices are. And they're these assets that are making banks nervous, making them not want to lend, making private capital not want to go into banks. So, we think getting them off will be very helpful.

Watch Christina Romer explain how the buyout will work »

Romer: Right. So there are a couple of things to say. One is, the reason that we're going in here is that this is a market that's basically disappeared, right? We don't -- it's the classic example in economics of what we call a market failure, that we don't have a well-functioning market in these kinds of things. So that's why the government's going in.

Why are we going in with private investors? It's because it's a way to leverage the amount of money that we have. It's also a way to do a check on ourselves, to make sure that we don't pay too much for these things.

We want private investors with those good sort of market instincts to help us figure out how much we should be paying for these things.

And then the last thing to say is that the reason that the private investors are going to go in is, we are doing some favorable financing for them. So, we are trying to make it more worth their while so that they're willing to come in and partner with us.

Roberts: So, there's a whole lot of questions about this, and there's a fair amount of commentary on it as well. Some commentary coming from Paul Krugman, the Nobel Prize-winning economist writing in The New York Times. He says that this is just recycling the Bush administration "cash for trash" idea. He says it, quote, "fills him with despair."

And he wonders about the exposure to the taxpayer. He says in his blog over the weekend, quote, "If you think that the banks really, really have made lousy investments, this won't work at all. It will simply be a waste of taxpayer money."

What do you say to that?

Romer: I say that he's just wrong. The key thing here is that -- the reason that we're partnering with the private investors is to make sure we don't overpay for them. So if they really aren't worth very much, that's what the private investors are going to help us to realize and make sure we don't make mistakes. That's part of how we protect the taxpayer.

The other thing I think that Paul is missing is the sense that this is just one piece in a very broad financial rescue. We've already done so much with the small-business program, the housing program, doing an evaluation of the banks to figure out how much capital they need.

Romer: And so this is all going to be part of that. This is one important step. But it's certainly not in any way the only thing we're doing for the banking system.

Roberts: And our good friend Jeff Sachs up at Columbia University, a noted economist, head of the Earth Institute up there, who has high hopes for this administration, wrote me an e-mail this morning saying that, quote, "this seems to be a nontransparent, unfair and unnecessary massive giveaway to the banks." What do you say about that?

Romer: I just say it's not right, that it is -- it's going to be -- it's a carefully worked-out program. Again, I'd like to emphasize the degree to which we're partnering with the FDIC, with the Federal Reserve.

Right? This has been a concerted effort.

I think what we think it's going to do is to establish a fair price, a good market price for these assets that will encourage the banks to sell these things off. And remember, the whole reason that we're doing this is because we want to get lending going again...

Romer: ... and this is something that just hasn't been happening.

Roberts: And Ms. Romer, there's one other big issue out there, and that's, you know, if you're private industry, you're looking at what's going on in government right now, and you see what's happening with AIG and all of this retroactive action to claw back these bonuses, and you've got to be thinking, OK, I'm a private firm. Do I want to get involved with the government? Because if I make money off of these assets, maybe they're going to come running after my butt and try to tax the heck out of it if I make some money. What do you say to those people?

Romer: I say to those people, the president has made a very important distinction. He said, you know, when we have a financial institution that's in trouble and the government has to come in and put in a lot of money, of course we're going to have very high standards for what they do and really expect them not to pay bonuses and things like that.

But, he said, think about the firms that we're hoping to partner with in this. These are healthy financial firms that in some sense are doing us a favor, right? Coming in to help us try to get these bad assets off banks' balance sheets. And I think the president has really tried to say there's a very big difference between those two kinds of firms.