WASHINGTON (CNN) -- President Obama turned his attention to the need for more clean-energy funding Monday, arguing that an expanded investment is needed to lay the foundation for long-term economic growth, cut dependence on foreign oil and slow the process of global warming. 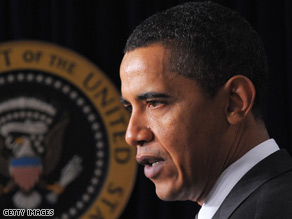 Obama, speaking to a group of renewable-energy company owners and investors, said the country has "known the right choice for a generation (and that) the time has come to make that choice."

"We can allow climate change to wreak unnatural havoc, or we can create jobs preventing its worse effects. We can hand over the jobs of the 21st century to our competitors, or we can create those jobs right here in America."

He met with the owners and investors in the Eisenhower Executive Office Building adjacent to the White House.

The tax breaks, he claimed, will help create 300,000 new jobs and double the supply of renewable energy.

Obama also highlighted a proposed allocation of $150 billion over 10 years in new clean-energy funding in his proposed fiscal year 2010 budget. Among other things, the president has proposed a 10-year extension of the research and development tax credit.

The credit, Obama said, returns two dollars to the economy for every dollar cut in tax collections.

"Over the years, we've allowed this credit to lapse or we've extended it year to year, even just a few months at a time," he said. "Under my budget, this tax credit will no longer fall prey to the whims of politics and partisanship. It will be far more effective when businesses ... can count on it."

Finally, Obama indicated his administration is planning a rollout of more comprehensive legislation to help break the country's "addiction" to foreign oil.

The need for new energy sources was a heated point of contention in the 2008 presidential campaign. Obama emphasized the need for renewable energy development, while Republican nominee Arizona Sen. John McCain stressed a preference for more oil drilling within the United States.