(CNN) -- President Obama said in an interview aired Sunday that the hardest decision he's made since taking office was to send more troops to Afghanistan. 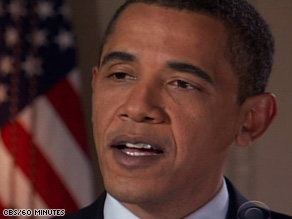 In a "60 Minutes" interview, President Obama said, "I fundamentally disagree with Dick Cheney."

Also in the interview on CBS' "60 Minutes," Obama defended his decision to shut down the U.S. prison at Guantanamo Bay, Cuba, and he countered criticism from former vice president Dick Cheney.

"I fundamentally disagree with Dick Cheney -- not surprisingly," Obama said. "I think that Vice President Cheney has been at the head of a movement whose notion is somehow that we can't reconcile our core values, our Constitution, our belief that we don't torture, with our national security interests. I think he's drawing the wrong lesson from history."

Obama was responding to comments Cheney made to CNN's "State of the Union" on March 15, when he said the president is making the nation less safe by closing the Guantanamo prison and ending interrogation practices that Bush administration critics consider torture for terror suspects.

Just a month into office, Obama ordered 17,000 troops to Afghanistan, the original front in the "war on terrorism" sparked by the September 2001 attacks on New York and Washington.

"I think it's the right thing to do. But it's a weighty decision because we actually had to make the decision prior to the completion of the strategic review that we were conducting," Obama said.

Coming off a tumultuous week over the millions in bonuses paid out to employees of AIG, Obama said Treasury Secretary Timothy Geithner's job is secure despite critics calling for his resignation.

Obama joked that even if Geithner were to tender his resignation, the president would tell him, "Sorry buddy, you've still got the job."

Geithner has come under fire over the $165 million in bonuses AIG paid its top executives after the insurance giant received more than $170 billion in federal bailout money.

A loophole in the recently approved economic stimulus bill, included at the behest of the Treasury, allowed AIG to pay the bonuses.

"It's going to take a little bit more time than we would like to make sure that we get this plan just right," Obama said.

The president also stressed that his administration won't endorse a House bill that would levy a 90 percent tax on bonuses paid out by companies that receive bailout money.

"As a general proposition, you don't want to be passing laws that are just targeting a handful of individuals," Obama said. "You want to pass laws that have some broad applicability ... you certainly don't want to use the tax code to punish people."