Commentary: Peggy Sue and a love so rare and true

Editor's note: CNN Contributor Bob Greene is a bestselling author whose current book is "When We Get to Surf City: A Journey Through America in Pursuit of Rock and Roll, Friendship, and Dreams." 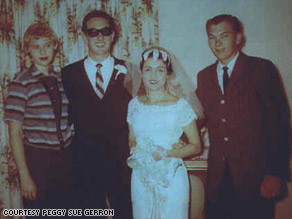 (CNN) -- After days on end of grim and dreary news, the first weekend of spring is with us, and with its arrival comes, to many people, the yearly promise of new romance and a chance for lasting love.

But if figuring out the secrets of how to revive a battered economy is something that is complicated and elusive, that quandary is simple in comparison to matters of the heart. The legendary experts on romance, star-crossed and otherwise, are generally not available for comment. Romeo and Juliet have left the building.

However, there is one person I know who has a better feel for the vagaries of love than most, and I sought her out the other day.

"Spring is the time when you allow yourself to hope that love will come around again," said Peggy Sue Gerron.

You may not recognize her full name, but you sure do recognize the first part of it.

Yep -- she's that Peggy Sue. The Peggy Sue of Buddy Holly's unforgettable 1957 hit, a song of longing and heartbreak that is instantly familiar today even to people who weren't born until decades after it came out. "If you knew Peggy Sue, then you'd know why I feel blue ..."

Juliet, that other symbol of the glory of love, may have been a fictional creation of William Shakespeare's imagination, but Peggy Sue was, and is, real. She lives in West Texas, just as she did when Buddy Holly recorded the song. She was actually not even his girlfriend, although she sensed a certain yearning on his part. She was the girlfriend of Jerry Allison, the drummer for the Crickets, Holly's band.

"I think the reason people think about finding love in the spring is that the season represents new beginnings," she said. "The flowers are blooming. The air smells good. You feel that you have a chance."

In the song, Peggy Sue, implicitly, was the one who did the dumping, not the one who got dumped. But time has made her understand:

"I think, I really believe, that on a rare occasion, two people in life run across each other in a path like two comets. And when it happens, I think that feeling lasts forever."

Which is to say: With a love so rare and true.

And that, she said, is what makes people keep looking for love regardless of how many times they may have tried and failed. She has a theory of what being in love does to a person:

Not that being Peggy Sue means she has all the answers. "I don't," she said. She is 68 now; she has been married twice, divorced twice. When she introduces herself to new people, they often say, "Oh -- like the Peggy Sue in the song!"

Sometimes she tells them she is in fact that Peggy Sue; sometimes she lets it go. It's an uphill battle to convince them she's not kidding.

And as the woman who eternally will be a symbol of true love's ways, she thinks she understands why people never give up on hoping to find the right person. "You have a tendency to put the walls up after you've been hurt," she said. "You think it's not worth trying again. But then you do it anyway. It's like it's not even up to you. It's stronger than your intellect."

For those who, as spring arrives, have just lost a great love, her advice for dealing with the sadness is to remember that some people never find love in their whole lives. "Even if you're the one to get left, you've been lucky to have the feeling. And the feeling, unlike the person, will never leave you."

Somewhere this spring -- many somewheres, undoubtedly -- the words, sung for the first time more than 50 years ago, will come blasting once again out of a car dashboard's speakers:

And people in 2009, hearing it, will remember anew just how much happiness the right person can bring.

"When I first heard the song," Peggy Sue said, "I just thought the drums and the lyrics and the melody were so great, it made me want to get up and dance. As I grew older, it began to seem like more of a love song to me. It began to seem more like a song about not giving up."

Living in Lubbock, Texas, a ham radio enthusiast in an age of Twitter and text messages, she said she is currently not dating anyone.

And with the arrival of spring, and its universal promise of life's best possibilities, she acknowledges that there is hope in her own heart, too.

All About Buddy Holly • Romance • Relationships