Mitt Romney: Obama 'is learning on the fly'

(CNN) -- Mitt Romney, the former governor of Massachusetts, ran for the Republican presidential nomination in 2008, but John McCain snagged the nomination. 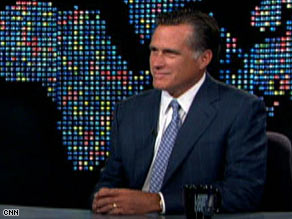 This businessman and politician is keeping a critical eye on how things are shaping up in the presidency he wanted, and he shared his views on Thursday night's "Larry King Live." He gave a sharp critique of President Obama's performance and shared his thoughts on Rush Limbaugh, Sarah Palin and stem-cell research.

The following transcript is edited for brevity and clarity:

Mitt Romney: Well, this probably isn't the right time for it. I line up with Warren Buffett on this. I prefer to see the president focusing all of his time and energy on the economy.

King: That's what he was talking about.

Romney: He is talking about it. He's out doing a rally in California. He's posing for the cover of magazines and doing a number of things. He's putting together a health care plan, putting together a cap and trade program, a lot of things on the agenda.

And frankly, if you're doing too many things, a couple of important things can slip by. And one of them that slipped by was the AIG legislation that allowed AIG executives to get these bonuses. It was put in a specific bill.

King: Are you as angered over this AIG thing as probably 90 percent of the public?

Romney: Yes, my view is that this is really the fault of two parties. One, the members of our government that weren't paying attention, at best. That's the most favorable way to characterize it. ...

The other, of course, is the folks at AIG. And you ask yourself, why couldn't they have done what other enterprises do that get in trouble, which is people come together; they talk about the sacrifice they are going to make to try and keep the enterprise going. But these guys seemed not to be willing to do that. ...

This is a president who is learning on the fly. He's never turned anything around before. He hasn't had the experience of leading a nation or a business or a state in trouble. And the first rule I can tell him is focus, focus, focus.

King: How do you account for the fact that his popularity stays high?

Romney: I know that people recognize that this is a man who is a decent fellow. He's intelligent. He's well-intentioned. He's just not experienced in the matters that we're dealing with right now.

King: The latest polls say you are the leader to get the party's nomination the next time around. Others say it's Rush Limbaugh leading the party. Is he the head of your party?

Romney: He's a very powerful voice among conservatives. And I listen to him. A lot of other people listen to him. He's not a spokesman for the party, of course. But we don't have one spokesman right now.

King: You are apparently [leading] in recent polls ...

King: Are you going to run again?

Romney: I can't imagine making that decision at this point.

King: But you're going to run again.

King: What did you make of Gov. [Sarah] Palin?

Romney: Boy, she was able to connect with our party in a very powerful way, ignite a lot of enthusiasm and excitement. That kind of political skill is rare. I hadn't met her before the announcement that she was going to be our VP nominee.

And I thought, boy, she's going to have a tough time up there on the stage at the Republican convention. Was I wrong. She got out there and just lit the place up.

Romney: Well, look, everybody is mad at AIG and their executives for doing what they did. But to suggest that this is not the fault of the people in Congress who passed the specific measure allowing them to take these bonuses is a diversionary tactic and wrong. You don't have a government take punitive action against a small group of people. Frankly, it's unconstitutional, in my view.

King: Former President Bush said he's not going to spend anytime criticizing Obama. He says he deserves silence. However, former Vice President [Dick] Cheney is taking a very different tact, charging that he's making choices which would make us vulnerable for another attack. Which way do you go here?

Romney: Well, I think there's a standard which is applied to former presidents, and that standard is that they have had their time on the stage and it's best for them to step aside and let the new president have his or her chance. I think President Bush is doing the right thing.

King: Do you think we're more vulnerable to an attack?

Romney: I think if we're going to release the detainees that are in Guantanamo and put them out either in our own prisons or at prisons in nations that are going to release them, that will make us less secure. ... I'm glad that President Obama decided to pull back on his original plans to immediately bring our troops home from Iraq. We're succeeding there. He's decided to go a little more slowly. ... That's the right course, and I appreciate that.

King: Do you have faith in American business?

Romney: Yes. ... Every job we have that isn't working for [the] government comes because somebody had an idea and began a business. Small business people, big business people, they're just American citizens who took a risk, and some of them find the chance to make that risk became positive and generate jobs and income. That's a great thing.

King: What about when business goofs?

Romney: To err is human and to make bad decisions is also human. You've seen some very bad characters. But whether that's an executive or a basketball player or a politician, it's throughout every society I know of. ... I'm not going to be taking my time taking pot shots at the entire profession of business or any other profession in this country. Except maybe lawyers -- I'm kidding.

King: Your wife has multiple sclerosis, a disease some scientists think will be cured through stem cell research. How is she doing?

Romney: She's doing terrifically well. She's riding horses on a regular basis. And she's one of the few that has had very little progression from the disease. So I'm pleased and hopeful.

King: Do you support the stem cell thing?

Romney: I support stem cell research. I do not support creating new embryos for the purpose of taking away the life of that embryo, and taking stem cells from those embryos.

King: Do you think we're going to cure MS?

Romney: I sure hope so. I think eventually we'll be curing most of the major diseases we know during our lifetimes.