Editor's Note: Drew Westen is professor of psychology and psychiatry at Emory University, founder of Westen Strategies and author of "The Political Brain: The Role of Emotion in Deciding the Fate of the Nation." He has been a consultant or adviser to several candidates, nonprofit organizations and Fortune 500 companies, and informally advised Barack Obama's campaign. 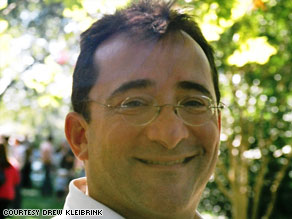 Drew Westen says Obama has a strong case to make but he needs to get a clearer, stronger message out.

ATLANTA, Georgia (CNN) -- In getting the nation's economy back on its feet and pursuing an agenda aimed at keeping it there for the next 40 years, the White House has to do two things at once: implement effective policies and keep the public behind the president long enough to keep implementing them until they work.

As the president learned in the stimulus debate, even the best policies don't sell themselves, especially when the other side is aggressively attacking them. President Obama's inspiration, Abraham Lincoln, noted that without public opinion behind you, good governance is impossible.

In this sense, the AIG debacle, in which the government has handed nearly $200 billion of taxpayers' money to one of the corporate Leviathans whose misadventures have cost many taxpayers their jobs, homes and savings, is both instructive and destructive.

The White House needs to be able to go back to the American people if the banks need another infusion of capital or the economy needs another stimulus -- both of which are high-probability events -- and the president needs public opinion at his back to enact his ambitious agenda on infrastructure, health care and education. iReport.com: AIG stands for 'Actually, it's government'

So aside from offering the kind of sweeping and long-needed regulatory reforms he proposed Wednesday (the policy side of the equation), what does President Obama need to do to prevent the AIG fiasco from eroding public confidence in what government can do in times like these?

Three things. First, he needs to make sure, when a story like this one breaks, that he and his public surrogates are all on the same page. The president got it right with his cool public outrage and his order to his Treasury Secretary to look harder for ways to stop another round of public theft.

In the same way, his press secretary, Robert Gibbs, responded with just the right tone to Dick Cheney's attempt to pin both the Bush economy and the next terrorist attack on the new administration. Gibbs wryly noted that Rush Limbaugh was apparently unavailable to do the interview and that the former vice president was not in much demand right now for his economic advice.

But watching some of the president's chief economic advisers publicly throw up their hands in helplessness, suggesting the government could feed the monster but couldn't control it, was a reminder of what happens when presidential surrogates speak without proper media training, a unified message and a clear sense of why getting their message right on this really matters.

Second, the White House needs to speak in plain language to the American people about what needs to be done, so it harnesses their legitimate anger and anxiety and continues to inspire their confidence and hope.

Americans understand that if you own 80 percent of a company (like the federal government owns of AIG), you are in the position to tell senior management what to do, and if you can't, you need a new lawyer, because you wrote a bad contract.

Americans could readily understand that if a single company is so important that its demise would spell the demise of the entire economy, then it should either be owned, tightly regulated (as public utilities are), or split up by the government, because we can't afford to have our common interest held hostage to the private interests of any single company. iReport.com: Expect 'long-term consequences' from AIG

Americans also would not have a visceral reaction to temporary "nationalization" of failing banks if someone would stop calling it nationalization and tell a coherent story about what happened and why we have to take the steps we do: that the Bush administration, in its bank bailout, socialized the risks of sleazy business practices while privatizing the gains, and that isn't fair.

If we as taxpayers are going to assume the risk as stakeholders when bankers make bad decisions, we should reap the profits as shareholders when those banks are profitable again, and use that money to pay down the national debt, cut our taxes and get a solid return on our investment.

That leads to the third point. The president needs to tell the American people the story, over and over, of how we got in this mess, who put us in it and what will and won't get us out of it. Franklin Roosevelt had no trouble pinning the nation's economic difficulties on the Republicans who had fiddled with free-market extremism as the nation's economy burned, and it took 40 years and the charisma of Ronald Reagan for anyone to put voice to that ideology again.

A good story typically has protagonists, antagonists, a battle between them and a resolution. The president has a penchant for telling stories without antagonists (even while those antagonists are antagonizing him, with their rhetoric of "borrow and spend," "socialism," etc.).

When referring to the causes of our economic meltdown, he often reverts to passive voice (something "was done") or to nameless, faceless, impersonal forces ("corporate greed"). The reality is that we're in this mess because for eight years we were in the grip of a radical economic ideology that preached that all would be well if we just gave free rein to corporate greed and removed all constraints on it.

The fact that the federal government engineered a $170 billion no-strings-attached, no transparency required bailout to AIG when the economy was melting down was not a deviation from that philosophy. It was its logical extension. iReport.com: What do you think? Sound off on AIG

The president needs to make clear where his policies -- and values -- depart from those of the previous administration if he wants people to hang onto their tenuous, newfound belief that maybe this time government is part of the solution and not the problem.