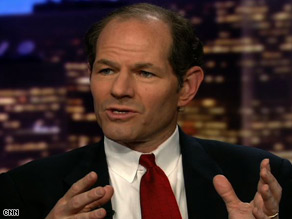 In his first television interview since being forced from office in a prostitution scandal, Spitzer told CNN's "Fareed Zakaria GPS" that the insurer was at the "center of the web" of transactions that have forced a massive bailout of the U.S. financial system.

AIG is now being kept afloat by U.S. taxpayers, and Spitzer said its woes stem from financial practices he first investigated as New York's attorney general.

"Back then I said to people, 'AIG is the center of the web.' The financial tentacles of this company stretched to every major investment bank," he said.

AIG's collapse stemmed largely from its array of exotic financial products such as credit-default swaps, which went sour when the U.S. housing market turned south after 2006.

"Bonus is a real issue. It touches us viscerally," Spitzer said. But he added, "The real money and the real structural issue is the dynamic between AIG and the counterparties."

Much of the $170 billion in taxpayer funds AIG has received is going straight to the buyers of its instruments, which amounted to a form of insurance on mortgage-backed bonds.

With the housing market in free fall and foreclosure rates spiking, those bonds have tumbled dramatically. That forced AIG to pay out money it didn't have to its clients.

"Virtually all" of the $80 billion-plus in the initial AIG bailout went to the company's counterparties, including nearly $13 billion to investment bank Goldman Sachs alone, Spitzer said.

"Why did that happen? What questions were asked? Why did we need to pay 100 cents on the dollar on those transactions if we had to pay anything?" he asked. "What would have happened to the financial system had it not been paid? These are the questions that should be pursued," he said.

Spitzer looked at AIG's financial practices as attorney general, an inquiry that led to the resignation of the insurance giant's longtime chairman Maurice "Hank" Greenberg in 2005. He became governor in 2006 but was forced from office in March 2008 after federal agents linked him to a high-end prostitution ring. He now writes a column for the online journal Slate. iReport.com: Sound off on AIG

The full interview with Spitzer is scheduled to air Sunday at 1 p.m. ET.