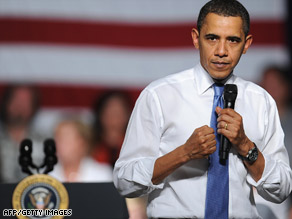 President Obama said he takes responsibilty for the AIG controversy. He added, "We've got a lot on our plate."

Cushioned by high approval ratings, analysts said Obama can emerge from this controversy relatively unscathed, but there's only so many times he can get away with saying, "Blame me."

AIG accepted more than $170 billion in federal assistance in the past six months. It was revealed this week that since accepting those funds, the company doled out more than $165 million in bonuses.

In the stimulus bill passed last month, Congress had an opportunity to put a stop on those mega-bonuses. But in a last-minute adjustment the language of the legislation was changed.

Sen. Christopher Dodd, chairman of the Senate Banking Committee, told CNN on Wednesday that he was partially responsible for adding the loophole after coming under pressure from the Treasury Department. At the time, he said, the changes "seemed like innocent modifications."

Watch what Dodd says about his role »

"I know Washington's all in a tizzy and everybody's pointing fingers at each other and saying it's their fault, the Democrats' fault, the Republicans' fault. Listen, I will take responsibility. I'm the president," Obama said Wednesday at the town hall meeting in Costa Mesa, California.

But the president's mea culpa wasn't all encompassing.

Ali Velshi and the CNN money team search for truth inside the AIG scandal. A special CNN investigation.
8 p.m. ET Saturday and Sunday

"We didn't draft these contracts," he said. "We've got a lot on our plate. But it is appropriate when you're in charge to make sure stuff doesn't happen like this. So for everybody in Washington who's busy scrambling to try to figure out how to blame somebody else, just go ahead and talk to me, because it's my job to fix these messes even if I don't make them."

"I think frankly it's a disingenuous comment because he isn't doing very much about the problem, and after all it was the White House that leaned against Sen. Dodd regarding that amendment in the stimulus package," said Morici, a professor of international business at the University of Maryland and the former chief economist at the U.S. International Trade Commission.

Stephen Hayes, a CNN contributor and columnist for the conservative magazine The Weekly Standard, also wrote off Obama's words as "phony."

"He tried to take responsibility for it, but then he followed that up immediately by saying, look, we didn't write these contracts. I didn't create this mess. So, it felt a little bit like phony responsibility to me," he said.

Obama's remarks followed denials from Dodd that he had anything to do with the controversy and assurances from Obama's economic advisers that they had no control over AIG's bonuses.

Now, Treasury Secretary Timothy Geithner is facing criticism from some Democrats and calls from some Republicans to step down, and the Obama administration is left with yet another bump on the road to restoring public confidence in government.

In responding to the situation, professor and political adviser Drew Westen said Obama got it right, but his message was drowned out by the response of this economic team.

"But watching some of the president's chief economic advisers publicly throw up their hands in helplessness, suggesting the government could feed the monster but couldn't control it, was a reminder of what happens when presidential surrogates speak without proper media training, a unified message and a clear sense of why getting their message right on this really matters," Westen wrote in a commentary for CNN.com. Read Westen's advice for Obama

"The president needs to make clear where his policies -- and values -- depart from those of the previous administration if he wants people to hang onto their tenuous, newfound belief that maybe this time government is part of the solution and not the problem," wrote Westen, who informally advised Obama's presidential campaign.

Obama's approval ratings have hovered around 60 percent in recent weeks, slightly higher than his predecessors' numbers near the same time.

Given those ratings, Crowley said, Obama "is well-positioned to weather out this storm."

"He faces some political risk in the face of the revelation that his Treasury Department pushed for and got a legislative loophole, which AIG walked through to dole out its bonuses. Still, at the moment it is difficult to see the president taking a major blow," she said, noting that most of the outcry has been directed at AIG and Geithner. iReport.com: Share your thoughts on AIG and Obama

Bill Schneider, CNN's senior political analyst, pointed out that taking responsibility is different than "getting the blame."

"It's vaguer. It means, 'Because I'm president, I am ultimately responsible for what happens, even if I didn't do it,' " he said.

Schneider said it's not likely that the public will blame Obama for the bonuses, but the president must reassure Americans that he is on their side.

While the president has room to take blame for this problem, Crowley said, if this hiccup is followed by a series of squalls, "the picture changes."

"The president needs to take his own advice now, and move on -- or at least try. Whether he is forced to address it again depends on circumstances and whether his critics are able to capitalize on the moment to suggest things are not being properly watched," she said.