WASHINGTON (CNN) -- President Obama and his economic team say they were powerless to avoid paying AIG's bonus contracts, but some top legal experts disagree with that argument. 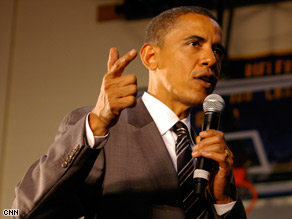 "I don't understand the notion that everyone sat back and said, 'Well, if there is a contract one must pay,' " said Elizabeth Warren, who leads Congress' Troubled Asset Relief Program oversight panel and is a law professor at Harvard.

"There is plenty of room for the American government on behalf of the American taxpayer to say: Time out -- We want to take a much closer look at that. Let's call in the lawyers. Let's read these contracts. Let's go over it."

CNN interviewed a series of experts in contract law and business management who said not only did AIG have options, but Treasury also should have insisted they exercise them.

First, they said, AIG could have asked its employees to renegotiate the terms of the deal like they asked automakers to do.

If employees refused, AIG could have refused to pay the bonuses, experts said.

"The advice I would have given AIG is, 'Don't pay it and if they jump up in arms saying you broke their sacred contract, sue me.' My experience is very few contracts are bulletproof," said Douglas Baird, an expert in contract law and professor at University of Chicago Law School.

Warren agreed: "I teach contract law. I want to see the contract that someone thinks doesn't have a place in it with ambiguity, room for negotiation, room for change when the circumstances change."

After reading one of the AIG contracts posted on a Congressional Web site, Baird concluded that refusing to pay the contract "would no doubt take some aggressive lawyering." But he pointed out "the contract itself even sets out procedures for the aggrieved employees who aren't paid. Why not just force them to use these procedures and prove they are entitled to the money?"

Before suing, the employees would also have to weigh the shame factor, the lawyers said. Many of the bonuses went to employees who drove AIG into the ground and dragged the American economy with it. Were they to sue for payment, they'd have to testify in detail about their work at AIG. The consensus: Most would settle rather than face hostile questions about the crisis they helped create.

One of the primary defenses of the bonuses that AIG CEO Edward Liddy offered in his testimony to Congress on Wednesday was that many of these employees might have walked off the job had they not gotten their bonuses.

But that argument feels thin to Warren.

"You know a lot of those people in the ordinary world would be facing pink slips anyway," she said. "There are people lining up for these jobs. The threat that 'If you don't pay me my millions of dollars I will leave' rings a little hollow in this economy."

Many in the legal community, outraged over the AIG payments, see them as part of a larger problem: Washington has not laid out a coherent long-term plan for rescuing the nation's financial institutions. iReport.com: Sound off on AIG

"If Treasury had had a clear strategy from the beginning for dealing with AIG and if it had put clear terms in place and clear restrictions over how taxpayer money would have been spent, we would not be here today," Warren said.

But she sees a silver lining.

"Outrage can be a very positive thing. It has a way of concentrating the minds of those who are in charge of this."

Warren said the administration can turn this crisis into a positive, if the Treasury Department reveals its plan for a long-term solution to the economic crisis.