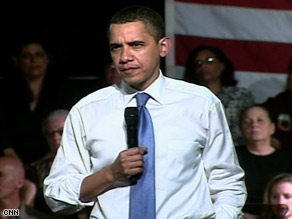 "We didn't draft these contracts. We've got a lot on our plate. But it is appropriate when you're in charge to make sure stuff doesn't happen like this," Obama told a town hall meeting in Costa Mesa, California.

Obama's comments came just more than an hour after Sen. Christopher Dodd, the Senate banking committee chairman, told CNN that he was responsible for language added to the federal stimulus bill to make sure that already-existing contracts for bonuses at companies receiving federal bailout money were honored.

At the town hall meeting, Obama said he was "outraged" at the bonuses that AIG executives have received while the company was getting "extraordinary assistance from taxpayers to keep its doors open."

"For everybody in Washington who is busy scrambling trying to figure out how to blame somebody else, just go ahead and talk to me, because it's my job to make sure that we fix these messes even if I don't make them," Obama said.

"But what's just as important is that we make sure we don't find ourselves in this situation again, where taxpayers are on the hook for losses in bad times, and the wealth generated in good times goes to those who are at the very top of the income ladder.

"... So I'm absolutely committed to ensuring we have the tools we need to prevent the kinds of abuses that sent AIG spiraling."

Earlier Wednesday, Obama said no one in his administration had been responsible for supervising ailing insurance giant AIG but that ultimately, the buck stops with him.

"People are right to be angry. I am angry. ... People are rightly outraged about these particular bonuses," he said. Obama said he held discussions with his economic team and with Rep. Barney Frank, D-Massachusetts, chairman of the House Financial Services Committee. Frank presided over hearings Wednesday on the AIG bonus controversy.

On Wednesday afternoon, AIG chief executive Edward Liddy told Congress that he has asked employees of the bailed-out insurer who took home more than $100,000 in bonuses to return at least half.

Liddy, saying he knew that the public's patience is "wearing thin," said some employees have decided on their own to return their entire bonuses to the company.

Obama also defended his criticized Treasury secretary, Tim Geithner, saying he "is making all the right moves in terms of playing a bad hand."

"There has never been a secretary of the Treasury, except maybe Alexander Hamilton, right after the Revolutionary War, who has had to deal with the multiplicity of issues that Secretary Geithner's having to deal with," he said.

All About Barack Obama • Timothy Geithner