WASHINGTON (CNN) -- Key members of Congress from both parties want NASA's internal watchdog fired, arguing he can't be trusted to oversee the $1 billion in additional money the space agency is getting under the Obama administration's economic stimulus package. 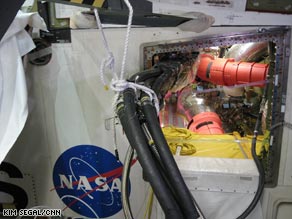 Government reports dating back to 2006 have accused NASA Inspector General Robert "Moose" Cobb of ineffectiveness, of profanely berating employees and being too close to the agency's leadership. Calls for his ouster have intensified in the past month, since NASA is getting additional stimulus money for space exploration, research, and aeronautics.

"Apparently, Mr. Cobb thought he was supposed to be the lap dog, rather than the watchdog, of NASA," Rep. Bart Gordon, D-Tennessee, told CNN.

Gordon, chairman of the House Committee on Science and Technology, has asked President Obama to remove Cobb. In a letter co-authored by Rep. Brad Miller, D-North Carolina, who leads the House Subcommittee on Investigations and Oversight, the lawmakers argue that "NASA cannot afford another four years with an ineffective inspector general."

"It's incredibly ironic for members of Congress who have scolded the inspector general for lousy oversight to dump a billion dollars into the agency," said Pete Sepp, vice president of the National Taxpayers Union, a nonprofit, nonpartisan watchdog group that monitors government spending. "The first thing you do when you're digging a hole is to stop digging. Congress doesn't seem to get that message."

Cobb declined two requests from CNN to respond to the complaints.

In December 2008, the Government Accountability Office released a report that criticized how Cobb was running the inspector general's office. The GAO, the investigative arm of Congress, "found that Mr. Cobb is one of the least productive IGs in the federal government," Gordon and Miller wrote.

"His monetary accomplishments reflect a return of just 36 cents for every dollar budgeted for his office. This compares with an average of $9.49 returned for every dollar spent on other IGs' offices. The main reason for this failure is that NASA's audit operation is not working."

Gordon told CNN that Cobb's "own peers said he wasn't doing his job, that he didn't understand the audit process and that he was not carrying out the investigation process. As a matter of fact, he was slowing it down, or even stopping it."

And Iowa Sen. Chuck Grassley, the ranking Republican on the Senate Finance Committee, agreed that Cobb must be replaced.

A 2006 investigation by a presidential integrity council found Cobb "engaged in abuse of authority" and had a "close relationship" with former NASA Administrator Sean O'Keefe that "compromised" his independence. The two played golf together and took official trips together on NASA aircraft. Read investigative integrity report (Warning: Report contains explicit language)

The committee also found that Cobb "engaged in an abuse of authority" through his "habitual use of profanity," and recommended disciplinary action "up to and including removal," Gordon and Miller wrote.

Cobb defended himself at a 2007 congressional hearing, arguing that he had upheld his oath of office.

But former staffers told the committee that Cobb created a disturbing work environment.

"One of my early experiences with Mr. Cobb was so disturbing that I considered leaving the OIG almost immediately afterwards," said Debra Herzog, former deputy assistant inspector-general for investigations.

"At a scheduled weekly meeting, Mr. Cobb, in front of his deputy and my supervisor, berated me concerning a word in a letter. In an ensuing monologue, loudly peppered with profanities, Mr. Cobb insulted and ridiculed me," Herzog recounted.

Lance Carrington, the former assistant inspector general for investigations, told the panel that "in many investigative cases, Mr. Cobb appeared to have a lack of independence when NASA officials were subjects, or if arrest/search warrants were obtained for NASA facilities. Mr. Cobb would question every aspect of the cases and gave the appearance he wanted to derail them before agents were given adequate time to investigate the allegations."

Gordon told CNN it's time for Cobb to go.

"President Obama needs to replace Mr. Cobb as quickly as possible with someone who can do the job," he said.