Senators slam plan for wounded vets to use private insurance 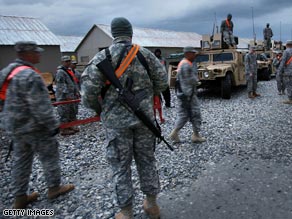 But the proposal would be "dead on arrival" if it's sent to Congress, Sen. Patty Murray, D-Washington, said.

Murray used that blunt terminology when she told Shinseki that the idea would not be acceptable and would be rejected if formally proposed. Her remarks came during a hearing before the Senate Committee on Veterans Affairs about the 2010 budget.

No official proposal to create such a program has been announced publicly, but veterans groups wrote a pre-emptive letter last week to President Obama voicing their opposition to the idea after hearing the plan was under consideration.

The groups also cited an increase in "third-party collections" estimated in the 2010 budget proposal -- something they said could be achieved only if the Veterans Administration started billing for service-related injuries.

Asked about the proposal, Shinseki said it was under "consideration."

"A final decision hasn't been made yet," he said.

Currently, veterans' private insurance is charged only when they receive health care from the VA for medical issues that are not related to service injuries, like getting the flu.

A second senator, North Carolina Republican Richard Burr, said he agreed that the idea should not go forward.

"I think you will give that up" as a revenue stream if it is included in this April's budget, Burr said.

Murray said she'd already discussed her concerns with the secretary the previous week.

"I believe that veterans with service-connected injuries have already paid by putting their lives on the line," Murray said in her remarks. "I don't think we should nickel and dime them for their care."

Eleven of the most prominent veterans organizations have been lobbying Congress to oppose the idea. In the letter sent last week to the president, the groups warned that the idea "is wholly unacceptable and a total abrogation of our government's moral and legal responsibility to the men and women who have sacrificed so much."

The groups included The American Legion, Disabled American Veterans, Military Order of the Purple Heart, Veterans of Foreign Wars of the United States, and Iraq and Afghanistan Veterans of America.

At the time, a White House spokesman would neither confirm nor deny the option was being considered.

All About Veterans' Affairs • Barack Obama