WASHINGTON (CNN) -- Facing mounting criticism of a spending package packed with billions of dollars in earmarks, the Obama administration made a vow Sunday: This president will bring a halt to pork-laden bills. 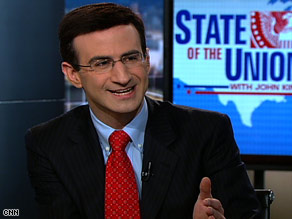 Peter Orszag says it is too late to cut earmarks from the spending bill inherited from the Bush administration.

"[Such bills] will not happen when the president has the full legislative and appropriations process in place," Peter Orszag, director of the White House Office of Management and Budget, told CNN's "State of the Union with John King."

He argued that the White House had little choice but to support the $410 billion omnibus spending bill, which it inherited from the previous administration. The bill would keep the government running through 2009.

But House Minority Whip Eric Cantor rejected the argument and noted that President Obama had vowed to take action against earmarks during the presidential campaign.

"There is no way anyone could take what Mr. Orszag has said with any credibility," Cantor said.

The spending bill contains nearly $8 billion in earmarks, which are pet projects of lawmakers on both sides of the aisle. The Senate postponed a planned vote on the bill Thursday after Democratic leaders came up short of the support they needed to pass it.

While many lawmakers consider at least some of the pet projects worthy, most openly reject the system of slipping earmarks into the bill to try to bring home as much "pork" as possible. But many of those who have complained about earmarks also have earmarks in the bill. They argue that until everyone is prevented from taking part in the process, their states or districts should not lose out.

Watch where some of the earmark money is going »

In a debate last September against Republican presidential candidate Sen. John McCain, Obama discussed earmarks and vowed to go "line by line to make sure that we are not spending money unwisely."

"Would we have written this thing differently? Absolutely," Orszag told King. "But we face a basic choice here. ... Is it uglier than we'd like? Yes. But again, this was negotiated last year. We think we should just move on. When we are engaged in the fiscal year 2010 appropriations process, it's going to look a lot different."

But Cantor, R-Virginia, said "people are expecting this administration to live up to the promises made."

Asked whether his argument is undermined by the earmarks from Republicans, Cantor responded that he and House Minority Leader John Boehner had asked their party to adopt a moratorium on the practice. Indeed, some lawmakers from both parties have called for a moratorium.

"There is no question that we've got to change this entire process. It is a system gone bad," Cantor said.