(CNN) -- President Obama can't assure that the economy will bounce back this year, but he says he will "get all the pillars in place for recovery this year." 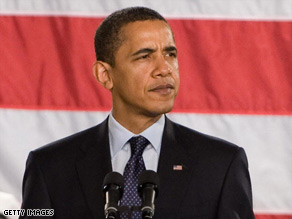 In a new interview, President Obama says the economy may not rebound this year.

Obama made the pledge in a 35-minute interview -- largely focused on the economy and the war in Afghanistan -- with The New York Times aboard Air Force One on Friday, according to a story published Saturday.

Conservative opponents have criticized Obama's new administration, saying it has pushed the country toward socialism and that his $787 billion economic stimulus package will do little to revive the struggling economy.

However, during the interview, Obama "exhibited confidence," saying the nation should not fear the future, the Times reported.

When asked if the United States was winning the war in Afghanistan, where he is sending another 17,000 troops, Obama replied, "No."

He said his administration is reviewing the U.S. policy toward Afghanistan and Pakistan, with the intention of finding a new strategy in the region. Obama said that reaching out to Sunni militant groups, such as the Taliban, to fight al Qaeda and other terror groups -- a tactic employed by Gen. David Petraeus in Iraq -- "should be explored."

"If you talk to General Petraeus, I think he would argue that part of the success in Iraq involved reaching out to people that we would consider to be Islamic fundamentalists, but who were willing to work with us because they had been completely alienated by the tactics of al Qaeda in Iraq," Obama said.