WASHINGTON (CNN) -- Republican lawmakers from more than 20 states across the country are willing to take federal funding, but only on their terms. 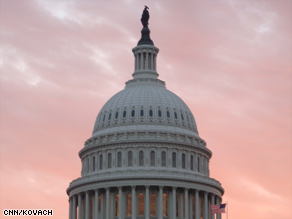 Some state lawmakers are pushing for sovereignty from the federal government.

From Montana to South Carolina, lawmakers in mostly red states have pushed ahead with measures calling for state sovereignty under the Tenth Amendment, saying the federal government has overstepped its bounds with the stimulus package. The states are calling for the right to ignore laws they deem unconstitutional.

Oklahoma state Sen. Randy Brogdon, a Republican and the first to introduce this type of legislation last year, originally pursued it because he thought then-President Bush and Congress exceeded their authority with the Real ID Act, which required states to include certain information on driver's licenses.

He called the stimulus package "immoral and unconscionable" and said it was "the final straw that broke the financial back of America."

Brogdon's bill passed the state Senate on Wednesday and the state House approved a similar measure. The office of lead House sponsor Republican Rep. Charles Key said it is confident a joint resolution will get through.

The legislation would be binding. So, if the governor signs it, it theoreticallly would allow Oklahoma to ignore laws that are not "enumerated and granted to the federal government by the Constitution," as stated in the Tenth Amendment.

"I'm sick and tired of Congress overreaching and underachieving," Brogdon said. He added, "If we have an opportunity to salvage freedom and protect sovereignty, it has to be done at the state level."

Similar legislation is moving along in South Carolina. The bill already passed in the state House and a state Senate panel approved it on Tuesday.

Republican state Rep. Lee Bright said he chose to sponsor the South Carolina measure because he thinks the stimulus package grants the federal government more power than the Constitution allows.

The Republican lead sponsor of the bill in Virginia, state Rep. Christopher Peace, said his state has used only a small portion of the money allocated in the stimulus package. He said local officials are the best managers of Virginia's budget and the federal government shouldn't interfere with how the state chooses to spend its money.

"I'm not saying we don't benefit from some of the money, but it's important to question what are the roles and boundaries, and ask if Congress is exceeding them," Peace said. "Our representatives in the federal government represent the same people we do and they need to work to keep the government small and limited and efficient."

All the bills invoke the Tenth Amendment, which states that "the powers not delegated to the United States by the Constitution, nor prohibited by it to the states, are reserved to the states respectively, or to the people."

Most are symbolic measures and none have passed yet, but local officials are hoping to send a message to Washington to back off.

Many states are criticizing the stimulus package, while others are trying to assert authority over other issues, like abortion in Missouri and exempting firearms from federal regulations in Montana.

Many of the bills include a provision that once the bill is passed, a copy will be sent to President Obama and Congress.

"It's time to send a message to Congress that we're sovereign," said state Rep. Judy Burges, an Arizona Republican. "We have many states doing this and if you have enough sending the same message, they're going to have to step back and take a look at what they're doing."