(CNN) -- It seems like the whole world knows all about Barack Obama, so let me introduce you to the anti-Obama, the second most interesting man in American politics. 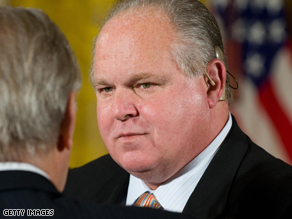 Rush Limbaugh: Whether or not you agree with him, he's something to hear.

Rush Limbaugh isn't black, slim, stylish or well schooled. He's a Republican with no elected office but a powerful hold on his party and a place in the news once again.

Limbaugh is the host of a radio show heard across the United States, a big-bellied man who bellows into the radios of millions of people.

He's confident, uncomplicated and almost always on the attack against Democrats, feminists and anyone on the Left.

As Republicans adapt to the role of an opposition party and search for a new opposition leader, Limbaugh may be emerging as their champion.

The Democrats would love it.

They think that Limbaugh, 58, is the very personification of an ugly Republican stereotype: he's a small-town college drop-out, an angry white man, who they believe offends the ethnic, urban and educated Americans the Democrats want to attract.

His latest headline: Even in the midst of a profound economic crisis, with millions of Americans waiting for help, Limbaugh says he hopes President Obama's recovery plan fails.

"What is so strange about being honest and saying, 'I want Barack Obama to fail, if his mission is to restructure and reform this country so that capitalism and individual liberty are not its foundation?' Why would I want that to succeed?"

Obama reportedly told Republican leaders they would have to decide. "You can't just listen to Rush Limbaugh and get things done."

But abandoning Limbaugh hasn't been easy.

Congressman Phil Gingrey told Limbaugh that "you don't have to try to do what's best for your people and your party. You know you're just on these talk shows and you're living well."

Limbaugh attacked them both on the air and they quickly offered public apologies.

The next time you're in the U.S., turn on the radio or check out YouTube from home, on your computer. The big man with the booming voice that you're bound to find is the anti-Obama. He's something to hear.

What do you think of Limbaugh's approach? Do you think he has a powerful hold on the Republican party? Sound Off below.