WASHINGTON (CNN) -- President Obama on Thursday called for a comprehensive overhaul of the U.S. health care system, warning that soaring medical costs present "one of the greatest threats not just to the well-being of our families ... but to the very foundation of our economy." 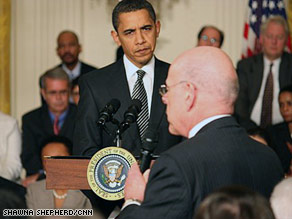 President Obama listens to Rep. Henry Waxman during a Q&A session with those at the summit.

Obama made his remarks while addressing a group of lawmakers, doctors, hospital officials and advocates at a White House summit on health care reform -- one of the president's top domestic priorities.

In a surprising and emotional moment, Obama was joined by Massachusetts Sen. Ted Kennedy, a longtime advocate of health care reform who has been battling brain cancer. Kennedy has been largely out of the public eye in recent months.

"We cannot delay this discussion any longer," Obama said. "Health care reform is no longer just a moral imperative, it is a fiscal imperative. If we want to create jobs, rebuild our economy, and get our federal budget under control, then we must address the crushing cost of health care this year."

"Now is the time for action," Kennedy later added. The pressing need for health care reform "challenges all of us to really do the best we can. ... This time we will not fail."

Watch Kennedy's comments at the summit »

Among other things, Obama is seeking to set aside $634 billion in a health-care reserve fund over the next 10 years to help move the country closer to the goal of universal coverage. He also would require senior citizens making more than $170,000 annually to pay a greater share of their prescription drug costs under Medicare.

"This isn't a luxury; this is a necessity," Melody Barnes, director of the White House Domestic Policy Council, told CNN's "American Morning" on Thursday, explaining that health care reform is a must for the U.S. to get its "economic ship steady."

Watch Obama talk about his plan to revamp health care »

"Health care costs are exploding. Many people are bringing in less income every month and seeing their premiums go up at the same time. It's affecting the bottom line and businesses. It's also affecting the fiscal well-being of our country," Barnes said.

"So this is something we have to do, because of the tough economic times, and we feel like we've learned lessons from the past that are going to help us get health care reform on the president's desk for his signature this year."

Obama's new health and human services secretary nominee, Kansas Gov. Kathleen Sebelius, was not in attendance at the summit, though Nancy-Ann DeParle, the newly announced health care czar, was there.

As director of the White House Office on Health Reform, DeParle will work with Sebelius as the president's point person coordinating outreach to Congress on health care issues.

A senior administration source said Wednesday officials realize that this is an "ambitious timeline," and that "we've put a lot on the grill," but that they think it's a critical issue that needs immediate attention.

One out of three Americans under 65 went without health insurance at some point during 2007 and 2008, according to a report released Wednesday by the consumer advocacy group Families USA. An estimated 46 million Americans currently lack health insurance.

"The cost of health care now causes a bankruptcy in America every 30 seconds. By the end of the year, it could cause 1.5 million Americans to lose their homes," Obama said.

After Obama spoke, the summit attendees broke into five groups to discuss options in more detail.

DeParle and top economic advisers, such as Lawrence Summers and Peter Orszag, are moderating the group sessions. After those groups meet, the participants will gather again, and Obama will take questions, much like he did during last week's fiscal responsibility summit.

The regional summits, designed to emphasize the need for a "national conversation" on health care, will be hosted over the next month by governors in Michigan, Vermont, Iowa, North Carolina and California.

Seventy-two percent of Americans favor an increase in government influence over the health care system to help lower costs and expand coverage, according a February CNN/Opinion Research Corp. poll.