WASHINGTON (CNN) -- The Senate Judiciary Committee chairman called Wednesday for the establishment of a nonpartisan "commission of inquiry" to investigate allegations of wrongdoing against former Bush administration officials in their prosecution of the war on terrorism. 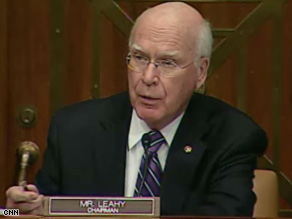 Nothing "did more to damage America's place in the world than the revelation that our great nation stretched the law and the bounds of executive power to authorize torture and cruel treatment," Sen. Patrick Leahy said at the start of a committee hearing.

American "detention policies and practices from Guantanamo Bay [Cuba] and Abu Ghraib [Iraq] have seriously eroded fundamental American principles of the rule of law," he added.

"The United States of America does not torture," President Bush said on more than one occasion, particularly after it was revealed that some detainees underwent waterboarding, in which strapped-down detainees are led to believe they are drowning.

Waterboarding is strictly prohibited by the U.S. military but was allowed for non-military agencies under the Bush administration.

Two days after his inauguration, Obama issued an executive order revoking the Bush order that allowed such interrogation techniques and requiring that all agencies abide by the Army Field Manual for interrogations.

Leahy, D-Vermont, called for the "truth commission" to have a "targeted mandate" focusing on issues of national security and executive power. He said it should look specifically at allegations of "questionable interrogation techniques," "extraordinary rendition" and the "executive override of laws."

He added that the commission should have the power to issue subpoenas and offer immunity to witnesses "in order to get to the whole truth."

Leahy refused to rule out of the possibility of prosecutions for perjury committed during the commission's hearings.

"To restore our moral leadership, we must acknowledge what was done in our name," he said. "We can't turn the page unless we first read the page. I do not want to see us in a case where we are lectured for mistakes we made by countries who themselves have some of the worst and [most] oppressive policies."

Leahy conceded, however, that the authority of any such commission would be significantly undercut without the cooperation of congressional Republicans.

The proposed commission is "not something to be imposed," he said. "Its potential is lost if we don't work together. ... We need to reach a mutual understanding of what went wrong and then learn from it."

President Obama said in February that he is willing to consider a plan to investigate allegations of wrongdoing against former Bush administration officials but is more interested in moving beyond the sharp political divide of the past eight years.

"Generally speaking, I'm more interested in looking forward than looking backwards," Obama said. The president said his administration would leave "no doubt" that the United States does not torture and follows the Geneva Conventions.

He added, however, that "if there are clear instances of wrongdoing, that people should be prosecuted just like any ordinary citizen."

Since taking office, Obama has ordered the closing of the Guantanamo Bay detention facility within a year, required adherence to the Army field manual's guidance on interrogation techniques and reinstated the presumption in favor of disclosure under the Freedom of Information Act.

There is no need, he said, to "go off helter skelter" on a "fishing expedition."

"We ought to follow a regular order here. You have a Department of Justice, which is fully capable of doing an investigation. They're not going to pull any punches on the prior administration."

Specter also said, however, that he "would not mind looking backward if there's a reason to do so."

"If we have evidence of torture, torture's a violation of our law. Go after it," he said. "If there's reason to believe that [former administration] officials have knowingly given ... cover for things they know not to be right and sound, go after them."

All About Patrick Leahy • U.S. Senate Committee on the Judiciary • George W. Bush