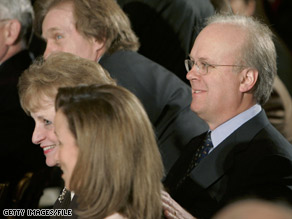 Harriet Miers and Karl Rove have agreed to talk about allegations of improper firings of nine U.S. attorneys.

Rove and Miers had been resisting congressional subpoenas about the matter since the House Judiciary Committee began trying to force Miers to testify in 2006. The Bush White House resisted, claiming she could not be compelled to appear. But a federal judge in Washington ruled that the former Bush administration officials had no grounds to invoke executive privilege in the case.

The committee, led by Rep. John Conyers, D-Michigan, has been investigating claims that Rove and his White House allies fired U.S. attorneys for political reasons and prosecuted officials whom they saw as opponents. Conyers called the agreement "a victory for the separation of powers and congressional oversight."

"It is also a vindication of the search for truth," Conyers said in a statement accompanying the announcement. "I am determined to have it known whether U.S. attorneys in the Department of Justice were fired for political reasons, and if so, by whom."

The controversy stems from the 2006 firings of the top federal prosecutors in nine U.S. cities, some of whom were singled out because they were considered insufficiently "loyal Bushies," according to one e-mail from a former Justice Department official uncovered in the probe.

U.S. attorneys are political appointees who serve at the pleasure of the president. But the Justice Department's description of the firings as "performance-related" once the shake-up became public triggered an outcry from the fired lawyers and led to allegations of political influence on Justice Department hiring decisions and cases.

In September, the department's internal watchdog found the process behind the firings "fundamentally flawed" and sharply criticized top Justice officials, including former Attorney General Alberto Gonzales. Its report called for an outside probe to examine potential charges, and Gonzales' successor, Michael Mukasey, appointed a special prosecutor to investigate the case.

The Bush White House insisted the firings of the nine U.S. attorneys were legal. But Democrats said the central questions behind the dismissals -- who decided the prosecutors should be ousted and why -- remain unanswered.

Rove was former President Bush's top political adviser for most of his two terms, and Miers was the top White House legal adviser from 2005 until early 2007. They had been resisting congressional subpoenas in the investigation, citing executive privilege.

Rob Saliterman, a spokesman for the former president, issued a statement saying the deal had been reached "at the urging of the Obama administration and in consideration of the executive branch interests at stake." The agreement "satisfies the Committee's desire for additional information and will finally put this matter to rest," Saliterman said.

Congress went to court to enforce the subpoenas, and a federal judge in Washington ruled last year that the former Bush administration officials had no grounds to invoke executive privilege. After Rove received a new subpoena in January, the Obama administration said it was reviewing whether Rove and Miers were still covered by executive privilege and worked to clear the way for Wednesday's agreement.

"The president is pleased that the parties have agreed to resolve this matter amicably and that they have committed to work in good faith to bring about a timely and final resolution of this matter, which is in the interest of the American people," Craig said in a statement from the White House.

The Justice Department will file a joint motion from Congress and the administration to put the court case on hold, Justice officials said, allowing it to be reopened if necessary.

CNN's Ed Henry and Terry Frieden contributed to this report.