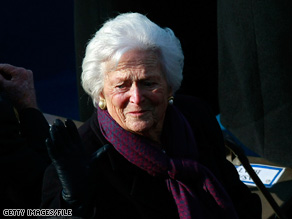 "In fact, she is awake," Becker said.

"We, of course, naively wanted to keep it quiet -- Mrs. Bush did," Becker said Wednesday night. "She thought there was too much fuss the last time."

Wednesday's surgery was not related to surgery she had in November for a perforated ulcer.

Her husband is with her in the hospital, where she is expected to remain for seven to 10 days.

"I am very impressed with and grateful to the wonderful team of doctors and nurses at The Methodist Hospital who have helped Barbara," the former president said. "We have every confidence she is in the best hands."

The open-heart surgery was taken as a precautionary step after she experienced shortness of breath last week and doctors found hardening on one part of her aorta, according to a statement released by the hospital.

"It's estimated as many as 10 percent of people over 70 need this type of surgery. It's basically a wear-and-tear that leads to calcium deposits."

Lawrie said the former first lady "really should" recovery quickly with the new aortic valve taken from a pig.

"That's what we use most commonly," he said, adding that Bush "woke up from the surgery joking."

All About Barbara Bush • Surgery