(CNN) -- Is Bobby Jindal following the model of a young Bill Clinton? 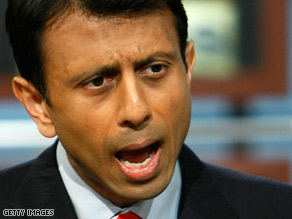 Louisiana Governor Bobby Jindal found that his speech last week was badly received and is trying to bounce back.

In 1988, the then-Arkansas governor was one of the hot names as a possible presidential candidate for his party. That was before "the speech."

Awarded a high-profile speaking role at the Democratic Convention, Clinton nearly derailed his national political future with a disastrous performance. The speech ran way too long, was widely panned and was cheered when he said "in conclusion."

But showing why he was often called the "Comeback Kid," Clinton helped bury the poor speech with an appearance on the highly watched "Tonight Show." Clinton emerged laughing as host Johnny Carson poked fun with a long, rambling introduction. And in a memorable moment, Clinton said the speech "wasn't my finest hour. Or even hour and a half."

Flash forward to last week, when the Louisiana governor and Republican rising star was tapped to give the GOP response to President Barack Obama's address to the nation. Like Clinton, Jindal found the speech badly received and some of the buzz about his future dimmed.

But a week that included comparisons of Jindal to the "30 Rock" character Kenneth ended on a far more dignified note. Jindal was profiled on "60 Minutes," a top-rated show with millions of viewers.

The venues are different -- serious interview segments, rather than late-night comedy. And the "60 Minutes" segment wasn't a last-minute add, like Clinton's "Tonight Show" cameo. But they offer the same opportunity: damage control.

Emory University political science professor Merle Black said Jindal, like Clinton, "is trying to minimize the losses and replace them with a positive image with voters."

Black said many politicians would have "hid under the bushes over that kind of thing." Instead, Clinton re-emerged days later to confront his botched performance. "Clinton was able to laugh at himself" and "humanize himself" with the audience.

Said CNN senior political analyst Bill Schneider: "Jindal is trying to follow that model." Although it's not the late-night circuit, he is "presenting a different side of himself, a more attractive and more appealing side of himself."

Schneider said some of Jindal's problems might have stemmed from reading a teleprompter, and the television appearances let him go before the public in a more natural setting.

And though it was a rough week for Jindal, Schneider said, damage control is important, because "a week is a lifetime in politics; three years is an eternity." Schneider said without confronting the speech, "he would have been a joke for a while."

As for trying to reach a national audience, the Louisiana governor used a few self-deprecating comments Monday at a news conference with home-state reporters at the Capitol in Baton Rouge. In comments his aides passed around, Jindal said, "I'm not nearly as good a speaker as the president. I'm not alone in this opinion."

The Times-Picayune newspaper said Jindal joked that he didn't mind the jokes comparing him to Mister Rogers, as opposed to colorful politicians in Louisiana's history. Of his delivery, he said, "I tried slowing down, and now they're saying I spoke too slowly."

But repeating his message about the GOP message on the economy and government, Jindal said, "Events since Tuesday have only shown this is a serious debate."

All About Bill Clinton • Baton Rouge