WASHINGTON (CNN) -- Global warming concerns took center stage Monday as two organizations held rallies to draw attention to an issue that President Barack Obama has promised to place near the top of his agenda. 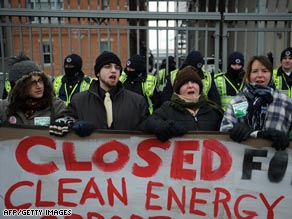 Demonstrators stand outside the Capitol Power Plant in Washington on Monday to protest the plant's use of coal.

A group of young protesters gathered in front of the Capitol to rally on behalf of legislation to reduce carbon emissions, decrease dependence on coal and oil, and speed a national drive toward "clean" energy.

Later Monday, hundreds of representatives of a coalition of environmental, public health, social justice and other advocacy organizations marched around Capitol Hill and encircled a Washington coal-fired power plant to highlight the issue of climate change.

The group, protesting the Capitol Power Plant's use of coal, stood in front of the plant's gated entrances. The plant powers the heating and cooling systems in the Capitol, as well as roughly a dozen other federal office buildings on Capitol Hill.

"The Capitol Power Plant, sitting just blocks from Capitol Hill, symbolizes the stranglehold coal has over our government and future," the group said on its Web site.

"It's not the largest or the dirtiest power plant in the country, but as the plant that is actually run by and for Congress it serves as an incredibly iconic symbol of what is wrong with our country's energy and climate policy."

No arrests were made as a result of the protest, which "didn't affect the operations of the power plant," Capitol police Sgt. Kimberly Schneider said.

House Speaker Nancy Pelosi and Senate Majority Leader Harry Reid released a letter Thursday calling for the plant to convert to 100 percent natural gas by the end of 2009.

"Taking this major step toward cleaning up the Capitol Power Plant's emissions would be an important demonstration of Congress' willingness to deal with the enormous challenges of global warming, energy independence and our inefficient use of finite fossil fuels," they wrote.

Several members of Congress and environmental leaders addressed the earlier rally, which was held at the conclusion to Power Shift '09, a four-day environmental summit organized by the Energy Action Coalition.

The coalition describes itself as an umbrella organization of 700 groups fighting for "clean energy solutions and the creation of a new green economy."

It's time to "turn up the political heat in Washington so we can turn down the heat on Mother Earth," Rep. Chris Van Hollen, D-Maryland, told the crowd. "The science tells us that the time for talking about this problem is over. The time for action is now."

The concept of "clean coal" is a "dirty lie," added environmental activist Robert F. Kennedy. "The most important thing you can do is not to change your light bulb but to change [members of Congress who have been] corrupted by ... dirty, filthy industry."

America needs to be freed from the "carbon cronies," who are part of the "biggest threat to civilization," Kennedy said.