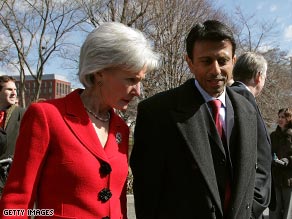 Sebelius, who administration officials say Obama seriously considered to be his vice-presidential nominee, has been rumored to be a top contender for the job for weeks.

The post is still vacant after the first pick, former Sen. Tom Daschle, stepped aside after questions were raised about his failure to pay more than $100,000 in taxes for use of a car and driver.

CNN reported earlier this month that Sebelius met in Washington with senior White House adviser Valerie Jarrett about the job, a sign that the administration has been giving her a close look since Daschle dropped out.

The officials noted Sebelius has a good personal relationship with Obama and remained in the running for the vice presidential slot until near the end of the process. She was also considered for other Cabinet posts.

All About U.S Department of Health and Human Services • Barack Obama • Kathleen Sebelius