Bill Schneider is in Hollywood, where they know a few things about making movies. So who does he think will be the lead in the Republican Party's new picture? There's a big cast, but still no lead.

HOLLYWOOD, California (CNN) -- Republicans have a script for 2012. Just listen to Newt Gingrich, speaking before the crowd at the Conservative Political Action Conference, which is an annual gathering of conservatives from across the country: 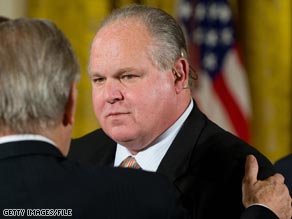 Some Democrats would like to portray Rush Limbaugh as the head of the GOP after the commentator said he hopes Obama fails.

"I've listened carefully to the president's speech [to a joint session of Congress and the nation]. I think it is the boldest effort we've seen to create a European socialist model," the former House speaker said.

Republicans like to evoke the name of their last great star.

"I couldn't agree with Ronald Reagan more," Boehner told the crowd at CPAC. But Reagan's no longer with us.

There's no clear frontrunner among the three best-known contenders, according to a new CNN/Opinion Research Corp. poll of who Republicans like as their party's 2012 nominee:

Watch Schneider talk about Republicans looking for a leader »

Mike Huckabee, who's got some good lines. "That 1,110 page bill that nobody read actually did have a title. It's the name of a movie: "Confessions of a Shopaholic,"' the former Arkansas governor told the faithful at CPAC.

And Mitt Romney, who looks like a leading man. "I'm going to do my very best to help Republicans across the nation re-establish a balance of power in Washington," the former Massachusetts governor pledged to the crowd.

While the poll shows Palin with an edge among Republican women, none of the three has the advantage with Republican men.

"You travel this road in life and as you turn a corner and there may be something there that circumstances change, you've got to call an audible and you decide to shift gears, take another direction. I'm always open for that," Palin said the day after the presidential election.

A lot of Republicans are looking outside Washington for their next lead. Maybe a governor, like Mark Sanford of South Carolina or Tim Pawlenty of Minnesota.

"The party has to grow and re-grow," Pawlenty said at CPAC.

Watch GOP Sen. Burr talk about the differences between parties »

How about a minority in the lead? Like Gov. Bobby Jindal of Louisiana. Oops -- his screen test didn't go so well.

"Our party is determined to regain your trust," he said as he gave a widely criticized Republican response Tuesday night to President Obama's prime-time address to Congress and the nation.

Some Democrats already know who they want to cast as the Republicans' leading man. He's featured in a new ad being run by Americans United for Change and AFSCME, two groups that supported President Obama during the general election and who are advocating for his agenda now that he's in the Oval Office.

"So who are Republican leaders listening to?" asks the ad.

"I want him to fail," says Rush Limbaugh in the TV commercial. Limbaugh will be the concluding speaker Saturday at CPAC.

Can a picture do well even if it doesn't have a well-known star in the lead? Maybe. "Slumdog Millionaire'' just won the Academy Award.