(CNN) -- President Obama's task force on the middle class formally began its work Friday, focusing its first meeting on green jobs and how they might strengthen the economy and the middle class. 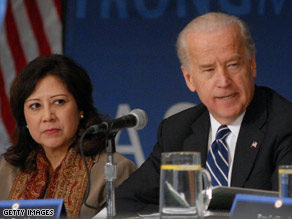 "Our energy and climate challenges offer us an opportunity to invest in new infrastructure, new buildings, new business models and new skills for American workers. I call this the energy opportunity," John Podesta of the Center for American Progress said in the meeting in Philadelphia, Pennsylvania.

Podesta, who served as President Bill Clinton's chief of staff for about three years, was part of a panel that spoke to the task force about green jobs in general and how they could help the middle class.

Van Jones, of Green for All, also on the panel, told the task force that green jobs will offer an opportunity in the United States.

"The country is facing a challenge of historic proportions. It is a challenge to retrofit and repower a nation, something that has never been done. It is a technological challenge, it is a legislative challenge, it's a business challenge. But it's also a moral challenge," he said.

"Because we have young people just blocks from this building, who have no hope, no future," he said.

"This green movement, this green wave, has a moral responsibility to be a green wave that lifts all boats. We are the first generation of Americans to build a green economy that Dr. [Martin Luther] King [Jr.] would be proud of."

Biden advocated green jobs in a piece that appeared Friday in The Philadelphia Inquirer. "Investing in green jobs also means keeping up with the modern economy. At a time when good jobs at good wages are harder and harder to come by, we must find new, innovative opportunities," he wrote.

"We're excited to be in Philadelphia promoting an idea that has so many benefits. We're starting to make the investments needed to leave a cleaner world to our children while also creating good jobs right now. When you're creating green jobs, you're doing well by doing good," he wrote.

Obama announced the task force last month, saying it is time for the government to act "boldly and swiftly" to assist a struggling middle class.

The inaugural meeting came as Donovan and Chu announced a partnership between the Department of Energy and the Department of Housing and Urban Development to better coordinate federal efforts to weatherize Americans' homes.

Donovan said in a written statement that the move would save or create thousands of jobs.