WASHINGTON (CNN) -- Those lazy days of summer may become a thing of the past if the new secretary of education has his way. 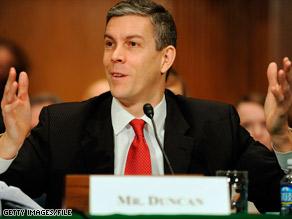 "When I go out and talk about that, that doesn't always make me popular with students. They like the long summers," Duncan said in an interview Wednesday with CNN conducted in the Education Department's library.

But Duncan said American students are "at a competitive disadvantage" because the United States has shorter school years than other countries such as India and China. iReport.com: Longer year a good idea?

More time in school is one of several ideas under consideration as Duncan settles into his new role.

Watch as the secretary discusses his strategy to improve U.S. education »

The lanky former college basketball player and father of two speaks quickly, with remarkable energy in the face of daunting challenges.

Thirty percent of high school students drop out before graduation, and another 50 percent won't finish college, according to Education Sector, a nonprofit think tank.

For Latino and African-American students, the numbers are more dramatic. About half of them will graduate from high school, the Washington-based group said.

"What's going on, state after state, due to this tough economy, is devastating educationally. And we can't afford to get worse now. We have to get dramatically better," said Duncan, former chief of Chicago Public Schools.

President Obama and lawmakers have directed billions of dollars to the Department of Education through the stimulus package, and they propose to send more in the 2010 budget Obama announced Thursday.

Duncan said some of that money will provide schools with immediate relief to keep teachers.

"Thanks to the stimulus package, we have the chance to save literally hundreds of thousands of teacher positions. This is a huge, huge deal," he said, citing a University of Washington study that suggests 600,000 teachers could be lost this year without drastic intervention.

"We're going to be able to avert maybe not all of those cuts but a huge percentage of those, and that's very very important," he said.

But the new funds may be only enough to keep a crisis at bay, said Kevin Carey of Education Sector. State and local shortages are forcing schools to make do with much less.

Duncan also suggested giving incentives to teachers whose students perform well, an unpopular idea with teachers' unions. And he said school systems may need to make tough decisions about teachers who don't perform at par.

"If teachers aren't making it, we want to support them and help them develop, but ultimately if it's not working, our children deserve the best," Duncan said. "They probably need to find something else to do."

Duncan also is pushing for new benchmarks that would use international standards to compare American students with those overseas.

He faults No Child Left Behind for standards that he said don't accurately monitor some children's progress.

"When you're told you're meeting those standards, you think you're doing OK. You're really not," Duncan said.

"Our children are not competing for jobs down the block or in the district or in the state -- they're competing against children in India or China, and they need to know how they stack up."

"There are 50 states, there are 14,000 school districts, 90,000 schools, and Secretary Duncan is responsible for every one of them. But they all have their own ideas, their own funding sources, their own local leadership," Carey said.