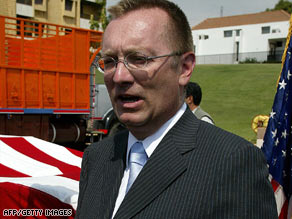 Calling the meeting "constructive," Wood said Feltman raised the issues of Syrian support for terrorist groups, its pursuit of nuclear weapons, its interference in Lebanon, its border with Iraq and its worsening human rights situation.

"We wanted to hear from the Syrians as to whether or not Syria will take some steps to address our concerns," Wood said.

Moustapha hailed the meeting as a good first step in which he and Feltman discussed a "vision for the relations" between the United States and Syria.

The meeting, Moustapha told reporters, "was based on the United States of America's desire to engage with the rest of the world based on what President Obama has coined as 'dialogue with respect.'

"We believe that this meeting has explored possibilities for Syria and the United States to engage seriously on the diplomatic level and discuss all areas of concern."

Both sides said they expect to hold future meetings, though nothing has been scheduled. Wood said the United States wants to see some positive steps by Syria about the concerns Feltman expressed before committing to subsequent contacts.

The first U.S. meeting with Moustapha since last September is being viewed as the start of more regular contacts between Washington and Damascus through normal diplomatic channels, senior administration officials told CNN. A U.S. charge d'affaires currently is the highest level American diplomat in Damascus.

The United States withdrew its ambassador from Syria four years ago, in protest of the assassination of former Lebanese Prime Minister Rafik Hariri. Washington accuses Syria of being behind the killing of the popular statesman in a massive bombing that also left 22 others dead. Syria denies it, but an ongoing United Nations investigation found indications of Syrian involvement.

Kerry painted the meeting as a break with Bush administration policy.

"Now we have an opportunity with the new president, President Obama, a new administration and with a Democratic Congress, to put in place a different approach," he said.

The Kerry and Berman delegations were the third and fourth congressional envoys to meet al-Assad since Obama took office just over a month ago.

On Thursday she called the latest meeting routine and said "it is too soon to say" whether relations between the two countries will improve.

But the Obama administration's new approach to talking with countries it has problems with seems to have struck a cord with Syria, which has expressed a desire to engage with Washington.

Ahmed Salkini, a spokesman for the Syrian Embassy, told CNN the meeting was much more of a "dialogue" between the two countries rather than the rehashing of complaints typical of the Bush administration.

"It was a totally different environment, " Salkini said.

"It was a genuine back and forth, compared to the Bush administration providing us a 'to do' list. The dialogue was based on respect, trying to find issues of mutual concern. We both laid out the issues each side had and tried to find the areas we can move forward on and the prospects for cooperation on those issues," Salkini said.