WASHINGTON (CNN) -- Call it a shot fired across the bow, or simply a stern warning to congressional Democrats: Power corrupts, and we are watching your every move. And if we think you are no longer representing the interests of your constituents, we will try to defeat you next year. 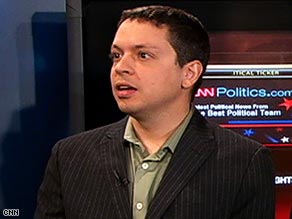 DailyKos' Markos Moulitsas says his online community is wary of Democrats being corrupted by power.

A Republican threat? Good guess, but no.

This is what Democratic activists are telling lawmakers of their own party, and they have formed a political action committee to raise money and help galvanize support for Democratic primary challengers in 2010.

Accountability Now PAC formally launched Thursday, creating a potential headache for Democratic leaders who would rather spend time focused on expanding their congressional majorities next year rather than defending Democrats from fellow Democrats.

Markos Moulitsas, founder of the DailyKos political blog, said that people in his online community are wary that Democrats are in danger of being corrupted by the ways of Washington.

"They want to hold Democrats accountable, knowing that if we do not hold them accountable we are going to become just like the Republicans did: corrupt, out of touch with their constituents and out of power," Moulitsas said.

Specifically, Accountability Now PAC representatives said they will be paying close attention to the interaction between K Street corporate lobbyists and Democratic lawmakers.

"Democrats are now in power in Congress and so the money that was flowing to Republicans from K Street is now going to them," said Jane Hamsher, founder of the political blog Firedoglake.

Democrats regained control of the House of Representatives and Senate in the 2006 midterm elections and expanded their majorities in 2008. They also won back the White House after eight years of Republican rule.

A mission statement from the organization said that it hopes to "create the political space needed to enable President Obama to make good on the many progressive policies he campaigned on -- such as getting out of Iraq, ensuring access to affordable health care for every man, woman and child, restoring our constitutional liberties and ending torture."

Accountability Now PAC's rollout was a little bumpy Thursday as leaders said their organization's goals had been misunderstood. They do not want to defeat conservative Democrats necessarily, only ensure that members of their own party are representing the will of their constituents.

Still, Accountability Now PAC is influenced by the liberal wing of the Democratic Party. In addition to prominent bloggers such as Moulitsas and Hamsher, the organization also includes influential liberal political groups such as MoveOn, Democracy for America and the powerful Service Employees International Union.

The organization hopes to raise $1 million to fund its effort in 2010 -- a considerably small sum compared with what it costs to run an average House campaign. But Accountability Now PAC's potential power lies in its grass-roots support. These organizations can rally support for their primary challengers by directing small-dollar donors to send contributions to specific candidates. Obama proved in this past election that small-dollar donations quickly add up.

Moulitsas and Hamsher appear as pragmatic as much as they are liberal. If we are to believe them, then Accountability Now PAC will only back credible challengers in 2010.

This new coalition does run the risk of appearing too aggressive when it comes to trying to pressure fellow Democrats to embrace their policy goals, but it is a risk organizers are willing to take.

So far, Democratic leaders have not tried to persuade the organization to abandon its plan, and if someone did, Moulitsas laughed and said he would "hang up the phone."

When contacted Thursday, the Democratic National Committee refused to offer a comment on the organization, while a Democratic Congressional Campaign Committee spokeswoman noted that it is a "member participation committee committed to electing more Democrats to the House."

"We don't really care if somebody calls up and starts yelling at us," Hamsher said. "That's why we can do this, where other people couldn't."