WASHINGTON (CNN) -- President Obama highlighted education, along with energy and health care, Thursday when he announced the outlines of his first budget. 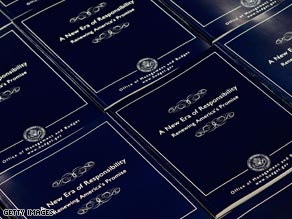 Copies of the Obama administration's 2010 budget go on sale Thursday.

The government's fiscal year runs from October of one year to September of the next. Here are some key figures for various departments:

• Agriculture Department funding would increase by $1.4 billion under Obama's proposed FY 2010 budget, from $24.6 billion to $26 billion.

The Agriculture Department also received $6.9 billion in the stimulus package.

• Obama's proposed 2010 budget "phases out direct payments over three years to farmers with sales revenue of more than $500,000 annually."

The document goes on to state that currently, "direct payments are made to even large producers regardless of crop prices, losses or whether the land is still under production. The program was introduced in the 1996 Farm Bill as a temporary payment scheduled to expire, but was included in the 2002 and 2008 Farm Bills. ... Large farmers are well positioned to replace those payments with alternative sources of income from emerging markets for environmental services, such as carbon sequestration, renewable energy production, and providing clean air, clean water, and wildlife habitat."

• The proposed budget cuts Market Access Program "funding for overseas brand promotion [and] minimizes the benefits that large for-profit entities indirectly gain as members of trade associations who also participate in MAP." It states that an "annual funding reduction of 20 percent will reduce federal spending and place a greater emphasis on promoting generic American products overseas."

• The budget also cuts cotton subsidies. The budget "proposes to eliminate the requirement for the government to pay the storage costs of cotton that is put under loan by the USDA. Cotton is the only commodity for which this assistance is provided."

• The budget boosts funding for "food safety inspection and assessment and the ability to determine food safety risks."

Almost all of the increase in funding is dedicated to ensuring the department has "the resources it needs to complete the 2010 Decennial Census effectively, efficiently, and ontime."

• The Commerce Department also received $1 billion in the stimulus package.

• $75.5 billion in spending on Iraq and Afghanistan for the remainder of 2009

• The budget supports an increase in Army permanent forces to 547,000 and in Marine Corps forces to 202,000 by the end of 2009, two to three years ahead of schedule. The Marines confirmed last week they had reached their target size. iReport.com: What are you cutting from your budget?

• The stimulus package, which is separate from the budget, contains $81.1 billion for education.

• The budget "increases funding for the Charter School program to support the expansion of successful charter school models, while increasing state oversight to monitor and shut down low-performing charter schools."

• The 2010 budget includes $26.3 billion in projected spending for the Energy Department. That figure is virtually the same as 2009, aside from $7.5 billion in 2009 emergency loans designed in part to help the domestic auto industry comply with stiffer environmental regulations.

• The Energy Department received another $38.7 billion in the stimulus package.

• The 2010 budget "builds on the $11 billion provided in the [stimulus package] for smart grid technologies, transmission system expansion and upgrades, and other investments to modernize and enhance the electric transmission infrastructure."

• It "supports and encourages the early commercial development of innovative, clean energy technologies through loan guarantees."

• It supports so-called "clean coal." The document states that the "budget supports Carbon Capture and Storage technology, and along with the $3.4 billion provided in the Recovery Act for low-carbon emission coal power and industrial projects ... will help allow the use of our extensive domestic coal resource while reducing the impacts on climate change."

• A total budget for the Department of Health and Human Services of $76.8 billion. This is down slightly from the $78.4 billion for HHS in 2009, but the stimulus package includes another $22.4 billion for HHS-related spending.

• The reserve fund is referred to as a "down payment on health care reform," and is financed in part by squeezing $316 billion in efficiencies out of the current health care system by "aligning incentives toward quality," "promoting efficiency/accountability," and "encouraging shared responsibility."

• The reserve fund is also financed in part by "rebalancing the tax code so that the wealthiest pay more."

• The budget will require higher-income senior citizens in the Medicare drug program to pay higher premiums. This accounts for a projected $8.1 billion in savings over 10 years.

• $6 billion for cancer research by the National Institutes of Health. This is in addition to the $10 billion provided by the stimulus package for 2009 and 2010.

• $64 million "to modernize the infrastructure used to vet travelers and workers. These funds will strengthen screening in order to reduce the risk of potential terrorism or other unlawful activities that threaten the nation's transportation system."

• The administration proposes increasing the Aviation Passenger Security Fee beginning in 2012. It says that the current fee covers only 36 percent of the cost of aviation security.

• $1.4 billion for Immigration and Customs Enforcement programs "to ensure that illegal aliens who commit crimes are expeditiously identified and removed from the United States."

• $88 million for the National Security division, up from $73 million.

• Funding to begin hiring an additional 50,000 cops on the beat.

• Funding for more prosecutors and agents to combat financial fraud.

• The Transportation Department received another $48.1 billion in the stimulus package.

This money would come on top of the $8 billion already allocated to high-speed rail in the stimulus package.

• Department of Veterans Affairs funding would increase by $5.5 billion under Obama's proposed budget, to $55.9 billion. The VA also received an additional $1.4 billion in the stimulus package.

• Funding for the VA under the budget is projected to increase by $25 billion over the next five years. The budget "expands eligibility for veterans health care to over 500,000 veterans by 2013."

• Under the proposed budget, "for the first time, highly disabled veterans who are medically retired from service will be eligible for concurrent receipt of disability benefits from VA in addition to Department of Defense retirement benefits."

• The 2010 budget expands mental health screening and treatment services offered by the VA.

All About Barack Obama • U.S. Office of Management and Budget