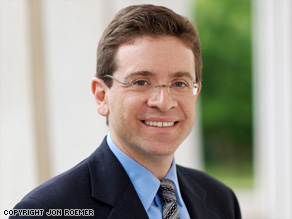 PRINCETON, New Jersey (CNN) -- In Tuesday night's speech, President Obama attempted to calm the nation, explaining how his programs will stimulate the economy and create a foundation for long-term economic growth.

Obama sought to explain what went wrong, starting with the elimination of regulations on the purchase of homes that people could not afford. Obama explained that it is "only by understanding how we arrived at this moment that we'll be able to lift ourselves out of this predicament."

The president's speech was badly needed. And President Obama is right, we need to understand how we arrived at this moment. But one speech is not enough.

Americans are more frightened about the economy with each and every new day. Jobs are being lost, stock prices are falling and home values plummeting.

According to an Associated Press-GfK poll, about half of those surveyed said they were seriously worried about losing their jobs and two-thirds expressed serious concern that they would not be able to pay their bills.

Americans are not sure what has gone wrong. Under those conditions, it will be difficult to restore confidence in the future. The conventional wisdom says that presidents should be the leaders to use the bully pulpit and explain to Americans the nature of any crisis that we face.

But history shows that Congress has played an extremely important role in shaping public debate in times of crisis and bringing to light crucial information. Although congressional hearings are often derided for grandstanding, the power of investigation is one of the most important functions Congress has played.

For every example of congressional excess, such as Sen. Joseph McCarthy's anticommunist witch hunts, there have been moments when Congress demonstrated its ability to explain and to educate.

Congress has been central to the investigation of political corruption. One of the most famous moments in the history of the institution took place in 1973 when the southern Democrat Sam Ervin, known for his folksy speech, chaired Select Committee hearings into the scandals surrounding President Richard Nixon.

The committee put together the various pieces of the Nixon White House's scandalous behavior, providing the fullest picture of the corruption that defined that presidency.

The investigation, watched by millions, revealed the cover-up that had taken place as well as a much wider web of illegal activities. The hearings altered popular understanding of what Watergate was about -- namely that Nixon's wrongdoing was potentially far more serious than they had thought.

Congress has also helped raise questions and gather data about foreign policy. In 1966, Arkansan Sen. William Fulbright, chairman of the Senate Foreign Relations Committee, dragged members of President Lyndon Johnson's administration before his committee to expose some of the weaknesses that were only starting to become apparent in the administration's Vietnam policies. Criticism about the war, which had been confined to college campuses, started to spread into middle-class, suburban homes.

Most relevant to today, Congress has investigated the causes behind economic downturns, using the power of investigation to raise public concern and improve knowledge of the economy.

This was the case with the famous Pecora Commission, the Senate Committee on Banking and Currency formed in the period between President Franklin Delano Roosevelt's election in November 1932 and his inauguration in March. It was a commission that lasted through May 1934.

The commission set out to discover what had led to the stock market crash in 1929. Committee Chairman Duncan Fletcher of New Jersey placed Ferdinand Pecora, the committee's chief counsel, in charge of the investigation.

Pecora, a tough New York prosecutor, proved to be a masterful interrogator. "I looked with astonishment," said his staffer John Flynn, a former journalist, "at this man who, through the intricate mazes of banking, syndicates, market deals, chicanery of all sorts, and in a field new to him, never forgot a name, never made an error in a figure, and never lost his temper."

Pecora brought some of the most prominent figures from Wall Street to speak with the commission and to answer difficult questions.

Americans learned that the tycoon J.P. Morgan had not paid income taxes for three years. Even worse, tax evasion was common among the wealthy. In his new book on FDR's Hundred Days, Adam Cohen recounts how the hearings revealed how National City Bank had caused enormous problems by mixing commercial and investment banking, reaping huge profits as customers were persuaded to make terrible investments.

Preferential treatment on stock, Americans learned, was routine as certain clients on Morgan's "preferred list" were given the best offers. By the time it closed, the commission produced thousands of pages of data about the inside operations of the financial world.

As a result of the Pecora Commission, public pressure for banking reform greatly intensified. The 1929 crash seemed like much less of a mystery when Pecora was done.

Congress passed historic banking regulations during the New Deal, including the Glass-Steagall Banking Act of 1933, the Securities Act of 1933, and the Public Utility Holding Company Act of 1935, all of which vastly expanded the role of the federal government in overseeing and regulating Wall Street.

Partisan warfare in the 1990s, including the impeachment proceedings against President Bill Clinton, made many Americans cynical about congressional investigation, as it seemed to be just another tool in the bitter culture of Capitol Hill.

But Congress can help us learn. We need another Pecora Commission, another Fulbright Committee, another Sam Ervin to use the power of Congress to shed light on the causes of our current economic meltdown.

Congress needs to learn more, not only about the kind of criminal activity for which Bernard Madoff is being charged, but also the legal practices -- such as risky home loans -- that created dangerous bubbles and put families at risk.

If voters and politicians are going to be able to evaluate legislation that is being proposed on a weekly basis, citizens must understand what has gone wrong.

This will be the first step toward restoring the confidence that the country needs if it is to start a better day.

All About Recessions and Depressions • Richard Nixon • Franklin D. Roosevelt