WASHINGTON (CNN) -- Defense Secretary Robert Gates is requiring officials working out the details of the next fiscal year's defense budget to keep their discussions "secret" and he's gone the extra step to ensure the secrecy. 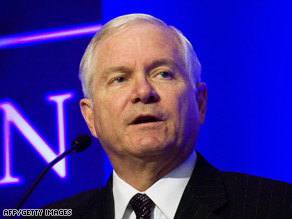 Pentagon spokesman Geoff Morrell told reporters Wednesday that those involved in formulating the budget for fiscal year 2010 have been required to sign a nondisclosure form "to create an environment in which the best possible budget can be built."

"This is highly sensitive stuff involving programs costing tens of billions of dollars, employing hundreds of thousands of people and go to the heart of national security," Morrell said.

The Pentagon classifies material about wars, intelligence and weapons every day, and though the move to make everyone sign the form is unusual, it isn't without precedent.

Gates wants the budgeting process "to be as disciplined" and "as forthright as possible," Morrell said.

"He thinks that by having people pledge not to speak out of school, if you will, on these matters while they are a work in progress, that you'll create a climate in which you can ultimately produce a better product, because people can speak candidly with the confidence that it will not be leaked," Morrell said at a Pentagon news conference.

Gates believes the leaking of portions of the budget would be counterproductive, especially since most of the information under discussion is classified, the spokesman said

"Ultimately, this product can't be judged by the sum of its parts; it's got to be judged (as) a whole. So if bits and pieces leak out, you start to tug on these strings and the whole thing could unravel. This budget the secretary wants to be judged in its totality, because that's where you will see the strategic balance he is trying to build."

Gates and the Joint Chiefs of Staff are among those who signed the agreement, Morrell said.

Gates wants people participating in the work to do so with "the confidence of knowing that what they are saying is not being leaked, it's not being disseminated and, therefore, we can work together perhaps in a more collegial and honest way and come up with a better product," Morrell said.

Morrell commented on a questioner's remark that there are "criminal penalties" if the "information is secret and therefore classified."

"Classified information with potential criminal consequences gets leaked all the time. This is to reinforce the message that indeed this is classified material. These are highly secret discussions. And we should remember that, be mindful of it and honor it."

When asked how this level of secrecy squares with the Obama administration's "stated goal of maximum transparency," Morrell said he doesn't think "the administration has been advocating a transparency in national security matters. I think that, at the end of this, it will be apparent to everyone where the secretary is and ... what the process has yielded."

All About The Pentagon • Robert Gates