WASHINGTON (CNN) -- President Obama will ask wealthy Americans to deal with a tax increase and pay higher Medicare premiums to help fund a $634 billion health care "reserve fund" aimed at reforming the system, according to senior administration officials familiar with the budget being unveiled Thursday. 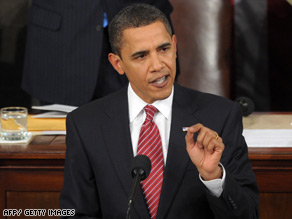 President Obama told Congress Tuesday night: "I have no illusions this will be an easy process."

The reserve fund will essentially be a piggy bank to be used only for reforming the system by cutting costs and trying to deal with the 46 million Americans without health insurance.

The budget will leave the actual details of how to reform the system to be worked out by Congress, and top Obama officials are already acknowledging this is only a start -- it will take more money to get the job done.

"This is a substantial down payment for health-care reform," one senior administration official said of the president's plan.

In order to raise $8.1 billion for the health-care fund, the president is going to ask 1.5 million wealthy senior citizens to dig deeper into their pockets to pay more for their own prescription drugs starting in 2011, according to officials.

In order to raise $318 billion for the health-care fund, the administration will raise the tax liability of wealthy Americans earning at least $250,000 a year by limiting how much they can write off for itemized deductions such as mortgage insurance and charitable contributions.

Top Obama officials use the example of billionaire Bill Gates to make their point, noting that if he wanted to deduct $10,000 in mortgage interest, at a tax rate of 35 percent he would currently get a tax break of $3,500. Under the Obama plan, Gates would only get to write off 28 percent, thus getting a tax deduction of just $2,800.

The administration projects it will raise another $176.6 billion over 10 years for the health-care fund by adding efficiencies to the Medicare and Medicaid programs.

Obama officials add that they inherited an annual budget deficit of about $1.3 trillion and need to find a way to raise revenue to invest in the future. "We were left with an unsustainable fiscal course," said one top official.