(CNN) -- A bank that received $1.6 billion dollars of the government's bailout money sponsored what reports are calling a lavish series of events in Los Angeles, California, last weekend. 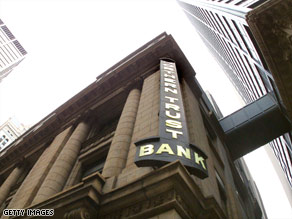 Northern Trust, based in Chicago, Illinois, spent an undisclosed amount of money sponsoring a Professional Golf Association tournament and associated client events, including concerts, dinners and parties, according to celebrity Web site TMZ.com.

The bank spent millions of dollars on the event, which included -- on top of the sponsorship costs of the Northern Trust Open tournament -- concerts by Sheryl Crow and Earth Wind & Fire, a private party at music venue House of Blues and gift bags from Tiffany & Co., the Web site said.

According to TMZ.com's report, employees and clients attending the tournament dined on seared salmon and petite Angus filet and stayed at some of Los Angeles' most elegant and expensive hotels.

Doug Holt, senior vice president of communication for Northern Trust, confirmed to CNN that his bank sponsored the tournament and its events but, he said, not at taxpayer expense.

Holt told CNN that as a "healthy" bank, Northern Trust did not seek the $1.6 billion it received from the government as part of the U.S. Treasury's Capital Purchase Program, but that it "agreed to the government's goal of gaining the participation of all major banks in the United States."

"This is the second year Northern Trust is sponsoring the Open as part of a five-year contract," Holt said. The contract was signed in 2007, before the government's Capital Purchase Program to aid banks came into existence.

Holt also said that the sponsorship is an "integral part of Northern Trust's global marketing activities," and as with all marketing, advertising, corporate sponsorship or charitable activities, no taxpayer money was used to fund the weekend events.

But that assurance doesn't seem to be enough for some.

Rep. Barney Frank, D-Massachusetts, the House Financial Services Committee chairman, is writing a letter to Northern Trust asking the bank to pay back the money it spent, according to Frank's spokesman.

"We are asking Northern Trust to repay the government the equivalent of the funds they spent on the tournament and related events," Steve Adamske of Frank's staff told CNN.

Northern Trust announced it was laying off 450 employees in December of last year, with the bank saying the move was part of a number of actions "to better position the company for improved profitability and continued global growth during these difficult economic conditions."