House says 'no' to pet primates

WASHINGTON (CNN) -- In the wake of a highly publicized chimpanzee attack, the U.S. House made its first official move to ban humans from owning primates as pets. 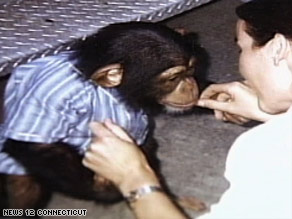 Travis, seen here as a younger chimp, was fatally shot by police after attacking a woman, authorities say.

The House overwhelmingly voted in favor of passing the Captive Primate Safety Act on Tuesday, which prohibits people from buying or transporting primates across state lines to keep as pets. This legislation amended the Lacey Act, which had only applied to wildlife and fish.

The Humane Society of the United States applauded the bill, which passed by a vote of 323 to 95.

"There is no reason for any private citizen to keep a primate as a pet, and this trade is driven by unscrupulous dealers who sell primates across state lines for thousands of dollars," said Wayne Pacelle, president and CEO of the HSUS.

Last week, Charla Nash, 55, was left with severe trauma to her face, scalp and hands after her neighbor's pet chimpanzee, Travis, mauled her in Stamford, Connecticut.

Police shot Travis to halt the attack, and he later died of gunshot wounds.

Nash was brought to the famed Cleveland Clinic, where the nation's first face transplant was performed. Doctors there are contemplating whether to offer her a similar procedure.

The bill was introduced by U.S. Reps. Earl Blumenauer, D-Oregon, and Mark Kirk, R-Illinois, who said it would protect animals and humans from similar attacks.

"As the tragic attack in Connecticut shows us, The Captive Primate Safety Act is necessary, common-sense legislation for the welfare of humans and animals," Blumenauer said. "Make no mistake, this bill will protect communities and ensure the humane treatment of these animals."

As cute as they can be, primates can inflict serious injuries and spread life-threatening disease, according to the Humane Society.

The average pet owner cannot provide for their basic social and physical needs in captivity, says the organization, which estimates 15,000 monkeys and other primates are living as either pets or in private zoos.

"As infants, they are fascinating," said Beth Preiss, who directs the organization's Exotic Pet Campaign. "But they grow up and become dangerous to manage."

The bill moves now to the Senate, where Democratic Sen. Barbara Boxer of California and Republican Sen. David Vitter of Louisiana will lead the effort to pass the legislation.