WASHINGTON (CNN) -- A national poll indicates most Americans think President Obama will give a good speech Tuesday night in his address to a joint session of Congress, but expectations are not as high as they were for his inaugural address. 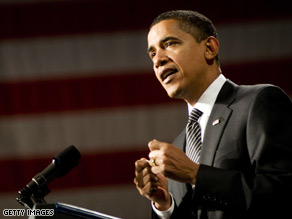 President Obama will speak before the House and the Senate on Tuesday.

Twenty-eight percent of those questioned in a CNN/Opinion Research Corp. survey released Tuesday morning said they think the president's prime-time address will be excellent.

That's down from the 44 percent last month who thought the inauguration address by Obama would be excellent.

"The expectation among Democrats is as high as it was for the inaugural address," said Keating Holland, CNN polling director. "But the number of Republicans who expect a good speech from Obama has dropped 24 points.

"That may be because an inauguration is usually seen as a bipartisan event, while the out-party often views a speech to Congress as a partisan exercise."

Watch what political observers expect from the speech »

The poll also indicates that 62 percent think it's likely that Obama's speech will make them feel more confident about the economy.

Join the best political team on TV as President Obama makes his first address to Congress.
9 ET tonight on CNN

And two out of three said the president's policies will move the country in the right direction.

Obama remains popular, but what about other prominent Democrats -- such as House Speaker Nancy Pelosi, D-California, and Vice President Joseph Biden, who will be sitting behind Obama on Tuesday night?

The public's opinion of Biden remains positive, with 57 percent saying they have a favorable impression of him.

The poll suggests 36 percent have a favorable opinion of Pelosi, with 43 percent holding an unfavorable view and one out of five unsure.

Many Americans don't have an opinion of Pelosi, probably because she has never run for national office, Holland said. Those who do know her are split.

Reid, who tends to get even less national television exposure than Pelosi, is unfamiliar to roughly half the public; those who know him tend to have an unfavorable view, Holland added.

Sen. John McCain, R-Arizona, remains popular after his election loss to Obama, with a favorable rating of 52 percent. iReport.com: What do you want to hear from Obama?

The CNN/Opinion Research survey was conducted Wednesday through Thursday, with 1,046 adult Americans questioned by telephone. The survey's sampling error is plus or minus 3 percentage points.