Poll: Most Americans fearful about state of country

WASHINGTON (CNN) -- A new national poll indicates that nearly three out of four Americans are scared about the way things are going in the country today. 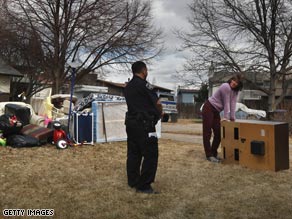 A deputy oversees an eviction in Lafayette, Colorado, last week.

Seventy-three percent of those questioned in a CNN/Opinion Research Corporation survey released Monday say they're very or somewhat scared about the way things are going in the United States. That's six points higher than in an October poll.

The poll was released a day before President Obama gives a prime-time address before a joint session of Congress.

"Americans always believe things are better in their own lives than in the rest of the country," said CNN polling director Keating Holland. "But they are realists as well -- they recognize that bad times somewhere else in the U.S. may eventually come to affect them. That's why so many say they are angry and scared, even though they're content with their own personal circumstances.

"There is a tiny sliver of good news -- the number of Americans who think things are going very badly has dropped from 40 percent in December to 32 percent now," Holland added. "But since most of those people switched from the very bad category to the pretty bad category, it's wrong to say that the public is more optimistic -- call them a little less pessimistic at best."

The CNN/Opinion Research Corporation poll was conducted Wednesday and Thursday, with 1,046 adults questioned by telephone. The survey's sampling error is plus or minus 3 percentage points.