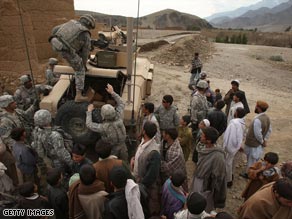 Karzai's office passed along a statement with details of a meeting Saturday between Karzai and a Pelosi-led congressional delegation visiting Afghanistan.

"Ms. Pelosi during the meeting said that the process of democracy in Afghanistan was on the right track and she assured President Karzai that the new American strategy for Afghanistan, which also has the views of the Afghan government included, will consider every necessary measure for a better coordination of the counter-terrorism effort in the region and have achievable goals.

The statement said Karzai thanked the American people for their help and noted a "recent consensus between the Afghan Government and NATO, which gives more authority to the Afghan security forces" during operations, a move that Afghanistan says will aid in the reduction of civilian casualties.

Pelosi's trip comes during a resurgence of the Taliban in Afghanistan and along the Afghan-Pakistan border and a rise in violence. On Friday, three coalition soldiers were killed in a roadside bombing in Uruzgan province in southern Afghanistan.

U.S. President Barack Obama asserts that the war in Afghanistan is the central front in the war on terror and has ordered the deployment of 17,000 more American troops to the country. About 38,000 U.S. troops are currently serving in Afghanistan. That number will increase to 55,000 once additional forces are deployed. Coalition forces from 41 other mostly NATO countries total about 31,500.

The congressional delegation to Afghanistan met Friday with U.S. Forces at Camp Eggers in Kabul and were briefed by U.S. Ambassador William Wood, and U.S. and allied military commanders.