(CNN) -- President Obama on Wednesday will visit Phoenix, Arizona, one of the cities hardest hit with foreclosures, where he's expected to outline a $50 billion to $100 billion plan to help homeowners. 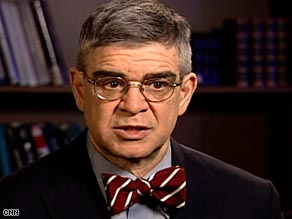 Though administration officials are tight-lipped about details, one idea that has been floated is for the federal government to reduce monthly mortgage payments by modifying loans.

Sheila Bair, the U.S. FDIC chairwoman, has advocated reducing payments to between 31 and 38 percent of a family's gross income.

"This crisis in housing has devastating consequences, and our government should have moved more forcefully to help contain the damage," Treasury Secretary Timothy Geithner said Monday.

Bernstein said it will be a "very aggressive plan to help responsible homeowners stay in their homes."

In Phoenix, the median home price is $150,000 -- a significant dip from its peak of $262,000 in recent years. The national rate of foreclosure increased by 79 percent between December 2006 and December 2007, according to RealtyTrac, a company that compiles data on home foreclosures.

Foreclosure filings -- default notices, auction sale notices and bank repossessions -- continued to climb in January, though at a slower pace than the month before, according to RealtyTrac. That was still 18 percent higher than in January 2008.

"It's really a toxic mix of higher than anticipated prices on monthly payments combined with house values that have dropped makes it impossible for people to refinance or sell their homes," said RealtyTrac Vice President Rick Sharga.

Some economists praise federal intervention in the housing crisis.

"You cut down on the ratio to make [home ownership] more affordable," said Anthony Sanders, a professor of finance and real estate at Arizona State University.

But Sanders cautioned that the president's plan will likely only make a dent in the problem. "Fifty billion is a good place to start but I'm just saying right now it's not enough," he said. "It'll be enough to save Kansas where they really don't have big negative equity problems."

Economist Peter Morici, of the University of Maryland, agrees with Sanders. "We are likely looking at a trillion dollars in mortgage losses before it's all over," he said. "And putting $50 [billion] to $100 billion in is not going to solve the problem."

Today is a game of payback for yesterday, said Phillip Robinson, a foreclosure attorney who has been quite busy lately.

CNN's Mary Snow and Jim Acosta contributed to this report.

All About U.S. National Economy • Recessions and Depressions • Foreclosure.com