TOKYO, Japan (CNN) -- U.S. Secretary of State Hillary Clinton made her strongest comments yet about North Korea Tuesday during her tour of Asia. 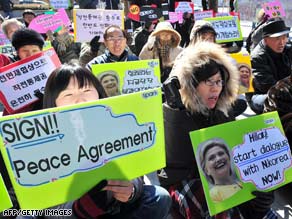 Anti-war activists hold placards during a rally near the U.S. embassy in Seoul on Tuesday.

Speaking at a news conference with Japanese Foreign Minister Hirofumi Nakasone, the U.S. secretary warned that a possible North Korean missile launch "would be very unhelpful in moving our relationship forward." Clinton said the U.S. is "watching very closely" actions by North Korea.

U.S. officials recently said they obtained evidence that North Korea was gearing up for a launch of a long-range missile.

North Korean officials disputed the claim, saying in the country's official news agency that North Korea was preparing to launch a satellite.

Clinton also said Tuesday that there is a possibility that the relationship between the U.S. and North Korea could improve if North Korea abides by the obligations that it has already entered into and verifiably and completely eliminates its nuclear program.

Watch Clinton speak on her concerns over North Korea »

If that happens, there is "a chance to normalize relations, to enter into a peace treaty rather than an armistice and to expect assistance for the people of North Korea," she said.

Clinton left for Asia Sunday on her first overseas trip as secretary of state and is slated to also travel to China, South Korea and Indonesia to discuss a range of issues, including mutual economic recovery, trade, the prevention of nuclear weapons proliferation and reversing global warning.

Watch what issues Clinton will focus on during her tour »