CHICAGO, Illinois (CNN) -- Illinois Sen. Roland Burris reiterated Monday that his sworn testimony regarding his contacts with then-Gov. Rod Blagojevich was not inconsistent with what he later said in an affidavit. 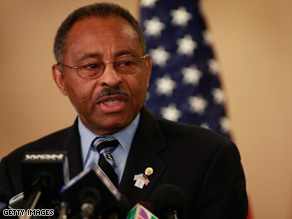 Sen. Roland Burris says he never made an inconsistent statement to lawmakers about Illinois' former governor.

The Democratic senator's comments come a day after Illinois Republican leaders called for a perjury investigation into whether Burris deceived the public last month when he failed to tell state lawmakers that Blagojevich's brother solicited him for campaign cash at the same time that the governor himself was considering whether to appoint him to fill the Senate seat vacated by President Obama.

"We said in our testimony before the impeachment committee, my lawyer stated, that we will have to file additional information in our report because there were some questions asked where we had to get sufficient information for the committee," Burris said outside Fellowship Missionary Baptist Church on Chicago's South Side before a five-day statewide "listening tour" of his new constituents.

"We also stated that we might be incomplete in our report," he said.

He said he decided upon receiving the court transcript to file a separate affidavit showing whom he talked to and what was said. But, he added, "There was no change in any of our testimony. We followed up as we promised the impeachment committee. We've done everything here that we said we were going to do."

Any suggestion to the contrary, he said, "is absolutely, positively not true. It was done because we promised the committee that we would supplement information in case we missed anything."

Burris has said that Rob Blagojevich asked him to contribute or help raise money for his brother, the governor, before Burris was named a U.S. senator December 30 but that he did not do so.

"I made clear to him I would not contribute because it would be inappropriate because I had expressed my interest in the Senate seat," he said Sunday. "I did not donate one single dollar."

Burris has come under fire for not mentioning the conversations during his January 8 testimony before the Illinois House impeachment panel that was investigating the governor. He said Sunday that he had addressed them in an affidavit filed this month.

The state House voted overwhelmingly to impeach the governor after he was arrested on federal corruption charges in December.

U.S. Senate Majority Leader Harry Reid is aware of the affidavit and is also looking into the issue, according to his spokesman, Jim Manley.

"Clearly, it would have been better if Sen. Burris had provided this information when he first testified," Manley said Sunday. "Sen. Reid is reviewing the affidavit and will await any action by Illinois legislative leaders after they review the matter."

Burris' attorney, Tim Wright, joined him at Sunday's news conference. He said the affidavit was submitted after they reviewed the transcripts from Burris' testimony and realized "there was also some additional information we could have offered."

In the affidavit, Burris said the governor's brother called him three times -- once in October and twice shortly after the November elections -- to "seek my assistance in fundraising for Governor Blagojevich." iReport.com: Should Burris be investigated? Share your thoughts

But Burris said that in one of the conversations -- he believes the last one -- "I mentioned the Senate seat in the context of saying that I could not contribute to Gov. Blagojevich because it could be viewed as an attempt to curry favor with him regarding his decision to appoint a successor to President Obama."

The affidavit does not directly state that Rob Blagojevich solicited funds or give a dollar amount. However, Burris spokesman Jason Erkes said Saturday that the governor's brother asked Burris to contribute or help raise up to $10,000 for Blagojevich.

Burris said he did not raise or donate any funds for the governor after a June fundraiser.

Asked by the impeachment panel with whom he had talked among Blagojevich's associates about his desire for the Senate seat, Burris replied that he had spoken with Blagojevich's former chief of staff, Lon Monk.

On Sunday, he said he had not mentioned Rob Blagojevich because the questioning then "went in a different direction."

Burris' appointment by Blagojevich was hotly disputed, as prosecutors alleged that Blagojevich attempted to sell the Senate seat to the highest bidder. He was ousted from office last month by Illinois lawmakers.

Attempts by CNN to contact Rob Blagojevich regarding the allegations, first reported by the Chicago Sun-Times, were unsuccessful.

Rob Blagojevich's attorney, Michael Ettinger, told the Sun-Times that Blagojevich had spoken with Burris about a fundraiser but "didn't know (Burris) was in the running for the U.S. Senate seat."