Bill Clinton: I should have better regulated derivatives

AUSTIN, Texas (CNN) -- Former President Bill Clinton was in Austin, Texas, over the weekend to host the Clinton Global Initiative University, which encourages college students and administrators to come up with creative ways to address global issues. 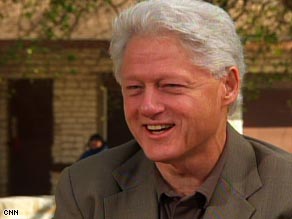 CNN's John Roberts sat down with Clinton to ask him about how the Obama administration is performing, how his wife, Hillary Clinton, is doing as secretary of state, and what responsibility he may have for the current financial crisis.

John Roberts: Mr. President, in terms of the overall economic downturn, Time magazine had an article out this week in which it named 25 of the people most responsible for the economic downturn, and you were there. They, they had a picture of you in what looked like a police lineup. They had a little button where you could vote who's the most responsible? They pointed to your signing of the Gramm-Leach-Bliley Act, the Commodity Futures Modernization Act. I wonder what you think about that.

Former President Bill Clinton: I think that the only thing that our administration did or didn't do that we should have done is to try to set in motion some more formal regulation of the derivatives market. They're wrong in saying that the elimination of the Glass-Steagall division between banks and investment banks contributed to this. Investment banks were already...banks were already doing investment business and investment companies were already in the banking business. The bill I signed actually at least puts some standards there. And if you look at the evidence of the banks that have gotten in trouble, the ones that were most directly involved in there ... in a diversified portfolio tended to do better.

Some of the conservatives said that I was responsible because I enforced the Community Reinvestment Act, and they said that's what made all these subprime mortgages be issued. That's also false. The community banks, the people that loan their money in the community instead of buying these esoteric securities, they're doing quite well.

Roberts: So what's your take on what Sen. [John] McCain said, that [President] Obama is off to a terrible start?

Clinton: I just disagree with him, but we have a different economic philosophy. For example, there's 100 economic studies which show that you get a better return in terms of economic growth on extending unemployment benefits or investing money in energy conservation jobs to improve buildings than you do giving people in my income group a tax cut. But it doesn't stop them. Those guys are on automatic. You punch a button and they give the answer they give you. There are a lot of tax cuts in that bill -- for middle-class families, for lower-income families. There's a $7,500 tax credit that will kick in when these plug-in electric vehicles go on the market, which could help us to become the world's leader in that and secure us jobs for a decade or more.

Roberts: Do you really think the president can change Washington? Can he bring the type of change to Washington that he campaigned on? He's already up against a wall against the Republicans in Congress -- not quite as big a wall as you found yourself up against in 1993, but he does seem to be having some difficulty. Do you think he really can bring change to Washington?

Bill Clinton weighs in on President Obama, his wife’s new role and much more.
Tomorrow/Tuesday, 9 p.m. ET on CNN

Clinton: Here's what I think will happen. I think that as we go along, if the American people stick with him and if he begins to have good results, then I think more and more Republicans will cooperate with him because they will see that he's right or because he carried their states or for any number of reasons.

Roberts: How long do you think he has?

Clinton: First, his next big challenge is to come forward with the details of how we're going to rewrite as many home mortgages as we can. How we're going to take some of these bad assets off the banks' books so they can get cleaned up and they can loan money and what conditions will we give more money to banks for. In other words, they're going to have to loan money from now on. That's what [Treasury] Secretary [Timothy] Geithner is working on. Those three things make a lot of sense. That's our long-term answer.

Roberts: But how much time do you think he has? A hundred days, six months, a year, two years?

Clinton: The public, I believe, will support him at least for a year in trying to work these things out. And he's been very straight forward in saying it might take as much as two years for the economy to really get in gear again. My instinct is it will happen a little quicker than that.

Roberts: What do you think of the job that President Obama did on steering the stimulus plan through Congress, and does he in fact have the experience necessary to be a good president, reach across party lines and craft a bipartisan bill?

Clinton: Well first of all, he has reached across, and it takes two to tango. I find it amazing that the Republicans who doubled the debt of the country in eight years and produced no new jobs doing it, gave us an economic record that was totally bereft of any productive result are now criticizing him for spending money. You know, I'm a fiscal conservative, I balanced the budget, I ran surpluses. If I were in his position today, I would be doing what he's doing. Why? Because the problem with the economy is the housing decline led to the general decline in values. Assets are going down. This stimulus is our bridge over troubled waters till the bank reforms kick in. He did the right thing, he did everything he could to get Republican support. He took some of their tax-cutting ideas.

But if you look at this bill, it is designed do three things. And it does all three. It puts money in the hands of people who need money to survive -- unemployment benefits, food stamp benefits, tax cuts. Second thing it does is to give money to state and local governments so they don't have to lay a million people off or raise taxes. Either one would be bad for the economy. The third thing is it does is create new jobs. Given the Congress he had and the environment and the speed with which they had to move, I think he did a fine job with this.

Roberts: Your wife is on a big trip over to the Far East, talking with the leaders of China. She's going to be taking on the North Korea issue. There's been some talk in the last week that with the appointment of all of these high profile envoys, from Richard Holbrooke to South Asia, George Mitchell to the Middle East, Dennis Ross in the same area, Vice President Joe Biden out there talking about foreign policy, that maybe she might get a little bit elbowed out here when she it comes to the big projects. Are you concerned about that? Do you talk to her about that?

Clinton: No. I'm not concerned about it. And these envoys are her idea, both the idea of the envoys and the people who were selected. She thinks that Joe Biden has got one of the best foreign policy minds and certainly some of the most important foreign policy experience we've had. Let me remind you when I was president, Al Gore had special relationships with both Russia and South Africa. And it didn't undermine the authority of either Warren Christopher or Madeleine Albright as secretary of state.

The reason they're doing this, and the reason the president agreed to support it -- and he came to the State Department to support the announcements of Holbrooke and Mitchell -- is that they all want to get off to a fast start and you've got to do a lot of things at once. It's inconceivable that she could devote the time and detailed attention right now to having a diplomatic strategy for Afghanistan and Pakistan that exactly parallels the military strategy that [the head of U.S. General Command] Gen. [David] Petraeus has or figures out how to start the Middle East peace negotiations again and what the timetable is and do all this other stuff.

So as long as they're working on a team and nobody is playing sharp elbows and this is a team -- these guys have got a team concept. The president has made it clear he wants everybody to be on the team, they all report in to her as well as to him. They're all working together. I'm very impressed by that. I think that she made a judgment that we needed in the country's interest to do everything at once. And I think she's right.

Clinton says U.S. envoys are part of a team »

Roberts: Of course, bilateral relations between the United States and China, a big focus of your administration, did you talk to her at all about this trip?

Clinton: Sure I did. Just like she consulted with a lot of people, we talked about it. I told her what my take on the Chinese is and especially in light of the fact that I work there now in AIDS, I have a big AIDS project there. And I know how they think economically and I think she'll do quite well there. I think she made a really good decision obviously, she had to go to Japan and south Korea, but going to Indonesia, the word's biggest Muslim country, sends a loud signal because Indonesia has a part of it, Bali, which is predominantly Hindu, which has been the subject of terrorist attacks. It's a good deal, I mean the whole thing, it's the right place to start.

Roberts: A couple of real quick questions, what president do you think you're most like?

Clinton: Well, personally, I'm not sure. One guy wrote a book saying I was most like Thomas Jefferson, but the times in which I governed were most like Theodore Roosevelt. And the results I received were similar. He had enormous success, the country was better off when he quit than when he started, but several of the things he recommended were not actually done until his cousin, Franklin Roosevelt, became president more than 20 years later.

All About Bill Clinton • HIV and AIDS • U.S. National Economy