ELMENDORF AIR FORCE BASE, Alaska (CNN) -- Hillary Clinton says her first overseas trip to Asia as U.S. secretary of state is aimed at creating a "network of partners" to tackle problems that no nation can deal with alone, including the global economic crisis. 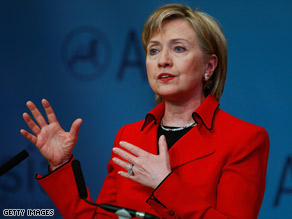 Hillary Clinton seeks improved relations with China, where she said the U.S. would renew military contacts.

En route to Asia on Sunday, Clinton told reporters that the economy would serve as the backdrop of her trip, and she intends to explain steps the United States is taking with its $787 billion stimulus bill. She said she will be "seeking cooperation on ways that we are going to work through these very difficult economic times."

Clinton is slated to travel to Japan, China, South Korea and Indonesia to discuss a range of issues, including mutual economic recovery, trade, the prevention of nuclear weapons proliferation and reversing the global warming trend.

The trip represents a departure from a diplomatic tradition under which the first overseas trip by the secretary of state in a new administration is to Europe.

Speaking at the New York-based Asia Society last week, Clinton said the Obama administration wants to "develop a broader and deeper" relationship with Asia, a region that has felt overlooked by the United States despite its growing global importance.

On Sunday, she addressed North Korea's nuclear program, which she's called "the most acute challenge to stability in northeast Asia." Clinton said the Obama administration is prepared to seek a permanent, stable peace with Pyongyang as long as its regime pursues disarmament and does not engage in aggression against neighboring South Korea. The United States has a "great openness and willingness to working with them," she said.

Much of Clinton's conversations during this week's travels will be dominated by the global financial meltdown. She said despite the financial crisis, the United States hopes to expand trade with countries in the region.

She called for an improved relationship with China, where she said the United States would shortly renew military-to-military contacts. She will also try to establish closer cooperation on climate change with China, which has surpassed America as the largest emitter of greenhouse gases.

Todd Stern, her new envoy for climate change, is accompanying Clinton on the trip.

Officials said Clinton had hoped to name a special envoy for North Korea before leaving for Asia to signal the Obama administration's commitment to addressing North Korea's nuclear program, but that the timing and specifics of the job were still being worked out. Clinton has said she hopes to name the envoy "soon."

CNN's Elise Labott in Washington contributed to this report.

All About Hillary Clinton • North Korea