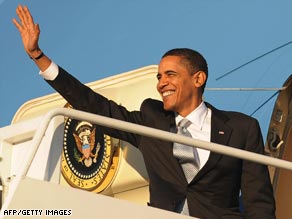 President Obama waves as he boards Air Force One for Chicago, where the Obamas were to spend the weekend.

The Senate had waited for the return of Democrat Sherrod Brown, who was returning from his mother's wake in his home state of Ohio, to close the voting late Friday.

For the rest of the month, the White House agenda will focus on addressing the housing crisis, cleaning up the banking mess and laying the groundwork for reform of the health care system and entitlement programs like Medicare.

Obama's economic stimulus plan, which top aides say will be signed into law as early as Monday at the White House, received no Republican votes in the House and just three in the Senate despite his heavy emphasis on drawing bipartisan support. There have also been several Cabinet miscues in the early days, but top White House aides are confident the president has gotten off to a strong start.

"Does the road to change have some bumps? Sure," said one senior White House aide. "But we're feeling good."

Several White House aides noted that in addition to the stimulus win, the president has signed into law an equal pay act and legislation expanding a children's' health insurance program for an extra 4 million kids.

"There's an enormity to what's happened so far," said one of the White House aides. "It's hard work, but it's worth it. We're sprinting."

Aides say they plan to pick up the pace next week with a stimulus signing ceremony as early as Monday, though it could slide to Tuesday morning depending on how quickly congressional leaders wrap up the legislative details.

Then Obama starts his first trip out West as president because White House aides say they believe Obama himself is their best salesman on the big agenda items coming. He will hold an economic event in Denver, Colorado, on Tuesday followed by the long-awaited unveiling, in Phoenix, Arizona, of his plan to deal with the foreclosure crisis on Wednesday.

White House aides are holding back on details of the housing plan as top officials continue to weigh the best approach. Top Democrats like House Financial Services Chairman Barney Frank have been pressing the White House for details, but White House Press Secretary Robert Gibbs said Friday the goal is to get it right rather than rush it out.

"It's not intended to be measured by one day's market scorekeeping, but instead to ensure that the 10,000 Americans each day that have their homes foreclosed on, and the millions more that are barely getting by, are protected," Gibbs said.

Several White House aides say it is unlikely the president will reveal his choice for either commerce secretary or health and human services secretary next week. As for which pick will be unveiled first, one aide said it depends on "whenever the next cake is baked" -- meaning the White House is so eager to get both nominations behind them that they will move forward on either one when the president makes up his mind on the picks.

The following week, the president will host what the White House is billing as a "fiscal responsibility" summit on February 23. The goal of the summit is to begin weighing the impact of massive federal programs like Social Security and Medicare just days before the president plans to unveil his first annual budget to Congressional leaders.

Then on February 24, the president will deliver his first speech to a joint session of Congress. Top aides say that while other topics like foreign policy could be addressed briefly, the speech will be heavily focused on the economy and the domestic agenda.

The president is expected to start taking on a role in selling the administration's plans for fixing the financial regulatory system during the speech and in his travels, according to top aides. Treasury Secretary Timothy Geithner began rolling out a plan to bail out more banks and bring more accountability to the existing government bailout program known as TARP, but that unveiling received harsh reviews on Capitol Hill and on Wall Street.