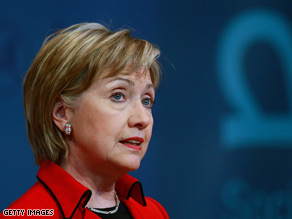 But, Clinton said in a 45-minute address to the New York-based Asia Society, the Obama administration is prepared to seek a permanent, stable peace with Pyongyang as long as its government pursues disarmament and does not engage in aggression against neighboring South Korea.

"If North Korea is genuinely prepared to completely and verifiably eliminate their nuclear weapons program, the Obama administration will be willing to normalize bilateral relations, replace the peninsula's long-standing armistice agreements with a permanent peace treaty and assist in meeting the energy and other economic needs of the North Korean people," she said.

The United States wants to move forward with the six-party talks, working with China, South Korea, Japan, Russia and North Korea to address North Korea's nuclear program, she said. However, keeping in line with the Obama administration's approach of "engaging" its enemies, Clinton said the United States would consider bilateral contacts with Pyongyang.

Despite the olive branch, Clinton warned Pyongyang "to avoid any provocative action or unhelpful rhetoric toward South Korea."

Tension between Pyongyang and its neighbor South Korea has increased in recent weeks, with North Korea announcing it would scrap peace agreements with the South, warning of a war on the Korean peninsula and threatening to test a missile capable of hitting the western United States.

Clinton also sought to reassure Japan, the top U.S. ally in the region, about its key concern, promising to meet with the families of Japanese citizens kidnapped by North Korea in the 1970s and 1980s.

Calling the 50-year-old United States security alliance with Japan "unshakable," Clinton said she will sign an agreement to move 8,000 U.S. troops from Okinawa to the island of Guam.

She delivered a sharp rebuke of the former Bush administration's foreign policy Friday, saying that the U.S. government in recent years had too often acted "reflexively" without "hearing the facts" or "listening to others." The Obama administration's foreign policy will value the opinions of other nations, she said, and the United States will "hold ourselves and others accountable," and acknowledge American contributions to global problems.

The United States can no longer afford to conduct foreign policy strictly on a "country-by-country" basis or by splitting the world into regions, she said. As both a trans-Atlantic and trans-Pacific power, she said, America will instead begin to press for stronger bilateral, regional and global cooperation.

Clinton also outlined a sweeping agenda of engagement with Asia, ranging from mutual economic recovery and trade to the prevention of nuclear weapons proliferation and reversing the trend of global warming.

But she said the Obama administration wants to "develop a broader and deeper" relationship with Asia, a region that has felt overlooked by the United States despite its growing global importance.

Much of Clinton's conversations will be dominated by the global financial meltdown. She said despite the financial crisis, the United States hopes to expand trade with countries in the region.

She called for an improved relationship with China, where she said the United States would shortly renew military-to-military contacts. She will also try to establish closer cooperation on climate change with China, which has surpassed America as the largest emitter of greenhouse gases. Todd Stern, her new envoy for climate change, will be accompanying Clinton on the trip.

Officials said Clinton had hoped to name a special envoy for North Korea before leaving for Asia to signal the Obama administration's commitment to addressing North Korea's nuclear program, but that the timing and specifics of the job were still being worked out. Clinton told reporters she hoped to name the envoy soon.

Stephen Bosworth, the dean of the Fletcher School of Law and Diplomacy at Tufts University in Medford, Massachusetts, and a former State Department official, has been offered the job to replace Assistant Secretary Christopher Hill, who is expected to replace Ryan Crocker as U.S. ambassador to Iraq.